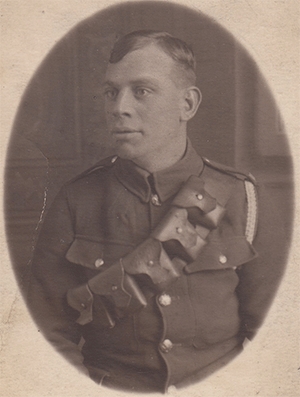 Born in 1885 at Runcorn, Hugh was the third child born to Samuel and Lydia Booth of 88 Bates Bridge, Runcorn. The eldest was Lucy, then James and a younger brother Joseph, was born in 1890. His father, Samuel worked as a farmer’s labourer.  In 1894 when Hugh was around 9 years old, his mother Lydia, died.
On 1st January 1906 Hugh married Lena Brown at Runcorn and later that same year they had a daughter and named her Lydia. In June 1907 a son, William was born. Tragedy was to hit Hugh again, after losing his mother at an early age, his wife Lena, died in the summer of 1909. Lena’s parents took Hugh and the children in. The 1911 census shows them living with Lena’s parents Thomas and Isabella Brown at 49 Canal Street, Runcorn. Hugh then age 25 was working as a farmyard labourer.
Hugh attested in Plymouth on the 2nd November 1915, joining the 104th Siege battery Royal Garrison Artillery. His given age was 30 years 2 months, he was 5ft 7 1/2 ins. He stayed in the UK training and was then drafted to France on the 30th June 1916, arriving at Le Havre on the 1st July 1916 (The opening day of the Battle of the Somme)

The  Sons of the Gun, Hugh on the left with three of his crew

Hugh was killed in action on the 31st July 1917, the first day of the 3rd Battle of Ypres, also known today as Passchendaele. The 3rd Battle of Ypres was a series of eight battles that commenced on the 31st July 1917 and would end on the 10th November 1917. It cost the lives of around 76,000 British Empire servicemen. The opening and 1st phase was the Battle of Pilckem. The 104th Siege battery were positioned just north of Ypres at an area known as Salvation corner, near to where the Yser canal reaches Ypres and is approximately 2 ¼ miles from Pilckem. During the opening barrages on the 31st German artillery targeted the position and Hugh and six of his comrades were killed.
The 104th Siege battery Royal Garrison Artillery were equipped with two 12-inch railway howitzers.

This picture was taken on the 3rd August 1917, three days after Hugh had been killed in action but shows one of the two railway guns of the 104th Siege Battery at Salvation Corner. (courtesy of the IWM)

Hugh is buried at Belgian Battery Cemetery, Belgium, next to him are six other members of the 104th Siege battery all killed in action on the same day.

Hugh’s mother in law Isabella, was guardian to his children, Lydia and William. In December 1917 she was instructed that when the medals arrived they were to be put in trust for William until he attained the age of 18. In 1919 she received a war gratuity for the children of £7 10/