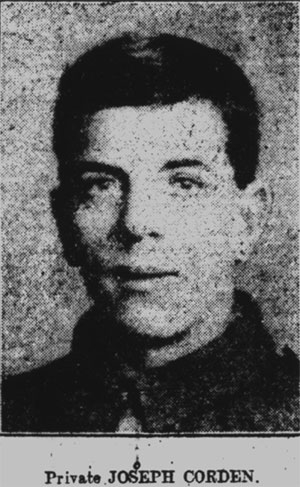 Mrs. Corden, whose home is at 39, Lord Street, has received news to the effect that her son, Private Joseph Corden, is now lying in hospital suffering from wounds in the leg and neck. This is the third time Pte. Corden has been wounded. On joining the Army, he was attached to the Machine Gun Corps, but in 1916, on recovering from a wound received by the blowing up of a machine gun which he had in charge, he was drafted to the Labour Corps. However, at the time he received his present wounds he was one of a party in charge of an anti-aircraft gun.

His friend Pte. John McCumesky, of Liverpool, carried him to the nearest dressing station (about seven kilometres away), and in a letter to his mother Pte Corden speaks of his friend’s action with gratitude. He writes in a cheery spirit and says that he is progressing satisfactorily. Mrs Corden lost her 19-year-old son, only four months ago, and her friends will sympathise with her in her natural anxiety for her son.

The son killed was Edward Corden, his page can be found here.