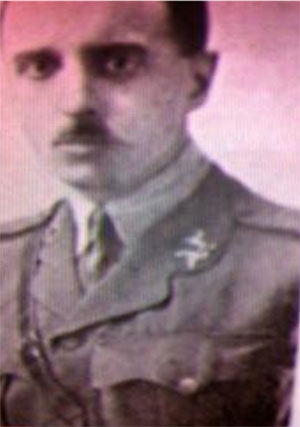 Henry John Duncan was born in Birkenhead, Wirral, Cheshire in 1886. As a young man he worked as a cotton broker in Liverpool at Orleans House and joined the Territorial Army in 1907. In his spare time, he was also a keen member of the Mersey Rowing Club.

At the outbreak of war, he volunteered for active service and his battalion (1st/5th (Territorial) Battalion of the King’s Liverpool Regiment) left for France in March 1915 and formed part of 2nd Division and his battalion fought at the Battles of Festubert and Loos in 1915.

As the name suggests the 55th Division consisted predominantly of men from the Liverpool area and other parts of west Lancashire and was made up of territorial soldiers i.e. part time soldiers who had volunteered for overseas service.

Before the Somme battles began, 55th Division formed part of the British Army facing the German Army at Wailly near Arras in Northern France. During this period, Henry was awarded the Military Cross for gallantry in June 1916 (1) (and his CO, Lt.Col Shute was awarded the DSO on the same date) and on 8th August 1916 (the same day as the attack on Guillemont) Private Arthur Procter of 1/5th KLR became the first soldier to be presented with a VC in the field by King George V for his actions in June 1916.

The attack on Guillemont on 8th August 1916 was part of General Rawlinson’s XIII Corps attacks in the Delville Wood, Ginchy and Guillemont sector which had already been heavily attritional in nature.  1/5th would lead the attack by 165th (Liverpool) brigade at 4.20am and as the final British battalion in the line maintained contact with the French 39th Division on their right. “A” Company (commanded by Henry) advanced on the right but after 130 yards were forced to dig in (2). Colonel Shute’s battalion war diary also provides the following description and makes clear that Henry was killed early on in the attack:

My losses were altogether about 340 killed, wounded and missing, including five officers killed (Major H. J. Duncan, Lieuts. W. H. Moore, C. L. Wilson, H. B. Cox and D. H. Longbottom). Whilst regretting the losses sustained, it is a great satisfaction for us to know that we completely carried out the instructions given and reached and maintained our objective, and there is a unique point in noting that the only advance registered on the whole of the western front by British troops on the morning of the 8th August, was '400 yards south of Guillemont,' which was made by this battalion. The conduct of the men was splendid, and the officers gave a fine example of courage and devotion to duty. 'A' and 'B' Companies lost their commanders early in the action, and the O.C., 'C' Company, was badly hit in the arm as he went over, but kept straight on, had his arm dressed in a shell-hole and waited there, directing his men until at 6.30 p.m. at night, seeing all going well, he came back over the top crawling and was dealt with by the regimental aid post.(3)

Visit to the Somme

In September 2017, I was lucky to visit the Somme with some friends and guided by the historian Andy Robertshaw. Andy had a daily record of the Somme battles with him and, because of that, I was able to link up the map to a reference to Maltz Horn Farm mentioned in the battalion war diary.

Driving around the area, we found a cross which marked the site of the farm and which was the jumping off point for the attack on 8th August. We then drove a short distance to Henry’s grave at the CWGC graveyard at Peronne Road Cemetery, Maricourt where I paid my respects.

A telegram of congratulation, signed by over 350 members, clerks, &c., of the Liverpool Cotton Exchange has been sent to Lieut.-Colonel J. J. Shute and Major Henry John Duncan, two members of the Cotton Exchange who have received - the former the D.S.O. and the latter the Military Cross.