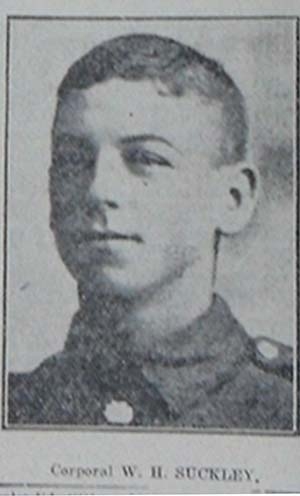 We regret to record the death, as the result of an accident, of Corporal Wm. H. Suckley, age 20, of the Cheshire Regt. (Bantams), who, whilst instructing some men in the use of high explosive bombs, was killed following an explosion at Prees Heath camp, Salop. Corporal Suckley joined the “Bantams” on their formation, and in a comparatively short time received promotion, first to lance-corporal and then to full corporal. Several letters of sympathy have been received by the late soldier’s parents from officers and friends.

The Captain and Adjutant of the battalion writes :- “The death of your son was the result of very serious bodily injuries received through an explosion which took place during a lecture on explosives used in bombs. After the first few minutes I do not think your son was in pain, as I understand he relapsed into unconsciousness. The commanding officer has asked me to express, on his own behalf and that of all the officers, warrant officers, and N.C.O.s of the battalion, their sincere regret at the loss which the battalion has sustained, not only of a good N.C.O, but one who was thorough and efficient in his work, also one who was universally liked and respected by all who came in contact with him.”

The regimental sergeant-major also writes in high terms of the unfortunate youth. He says :- “To prove the regard in which your son was held by us all, a subscription list was commenced towards buying a wreath as remembrance.” It appears that after buying the wreath more than £4 was left over, and it was decided to forward it as a contribution towards the funeral expenses, a kindly and thoughtful act, which is much appreciated by Mr. and Mrs. Suckley.

Lieut. May, the responsible officer of the instruction class, in a consoling letter to the parents says :- “He (the deceased) has worked with me for the past year, which perhaps makes me feel his loss more deeply than anyone else in the battalion, as we were always the best of pals right from the first. During the time he was on my staff as bombing instructor he gave me every satisfaction, and was always a splendid little soldier. Both officers and men thought a great deal of him and he was quite the most popular N.C.O. in the battalion.”

Corporal Suckley before joining the Army was employed in No.2 frame room, at Messrs. Lever Bros., and a very touching communication has been addressed to Mr. and Mrs. Suckley by the foreman of that department on behalf of the employees.

The funeral took place on Saturday, full military honours being accorded. The cortege started out from 60, Bromborough Road, Lower Bebington (the deceased’s abode), and proceeded to Bebington Church where he was laid to rest. The service was an impressive one, and conducted by the Ven. Archdeacon Ford (rector of Bebington).

There were detachments of men from both Prees Heath and Bebington Camps, and also a number of officers of the deceased’s regiments. A large number of Bebington Church Lads’ Brigade also attended, the deceased having for 2 1/2 years been a member of that unit.

At the graveside amongst the large number of the late Corporal’s friends, there was Corporal Crew, a comrade of the deceased’s who made a gallant attempt to resuscitate him until he himself was overcome by fumes and afterwards found unconscious lying over the deceased’s body.