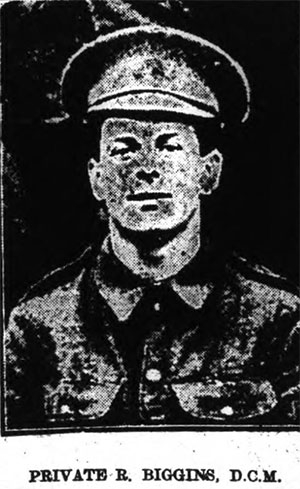 We publish a new photograph of Private R Biggins, of the 2nd battalion Sherwood Foresters, whose home is at 17, Lynas Street, Birkenhead, and who in September last was awarded the D.C.M. for gallantry. In the official list the reference to private Biggins is as follows:- Private R. Biggins 9189 “ For conspicuous gallantry, when he led two other men an a bombing attack on a crater, which they gained, occupied and held until relieved at 2.30pm on August 10”

On the outbreak of war Private Biggins was recalled to his regiment, being then employed as a dock clerk at the Birkenhead Docks and formerly with the Hall Line. He went to the front in September 1914 and was there close upon a year when he was sent to England suffering from wounds in the muscles of the left arm and was discharged from Birmingham War Hospital in September last. He is now in the Annexe, Devonshire place Birkenhead, recovering from a fractured arm.