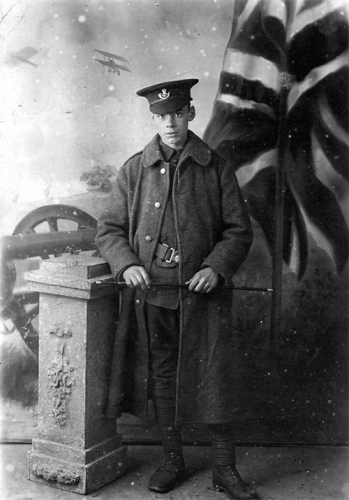 William Maskery was born 5 March 1897 in Crewe, he was one of twelve children born to William and Elizabeth Maskery, the family lived at 14 Howard Street, Sydney, Crewe. The 1911 census does show 13 children but one was a grandson. After leaving school age 14, William started work as a boy labourer at Crewe Works (LNWR) a shift that started at 6am each day for a pay of 4 shillings. When the war started 4 August 1914 William was quick to enlist and on 22 May 1915 he embarked for France. On 21 March 1918, the German spring offensive began, this was Germany’s last attempt to try and win the war before the Americans were ready in force. On 28 March 1918 William serving with the 7th battalion Kings Shropshire Light infantry was in the front line near to the village of Mercatel, south west of Neuville Vitasse when the Germans attacked. The war diary for the day states.

4.15am After a very heavy barrage and bombardments enemy attacked our position in large numbers at 5.15am and again at 7.15am. The first attack was repulsed by lewis gun and rifle fire. By his second attack he forced an entry at the junction of the front companies and started to bomb outwards. The right company after strong opposition having used all the available bombs were forced back and the survivors, about 25, withdrew to the reserve line. The left company formed a block, but the enemy worked his way in force behind them and they withdrew to the left and the survivors, about 15 fought their way back, with the 13th Kings Liverpool Regiment to the reserve line.

The right support company held on until (12 noon) when their right flank became exposed to prevent the enemy from working round the flank the company withdrew a short distance and took up a new position in the sunken road. The left support company withdrew into the line with the right support company. Battalion H.Q. were brought up into the line at 2.30pm the line being too weak to counter-attack withdrew behind the Green Line under the cover of lewis gun and machine gun fire. The battalion reorganised and occupied a line of old posts and trenches.

During this action William was killed in action, he had just turned 21.