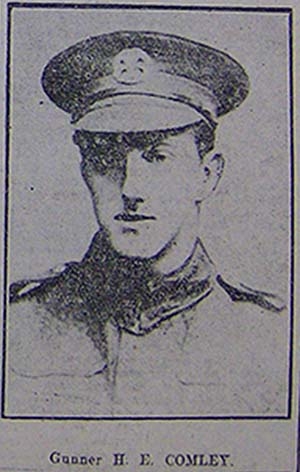 We announce with great regret the death in action of Gunner Hubert Edgar Comley, younger son of Mr. and Mrs. James Comley, of 21, Carlton Road, Birkenhead, Mr Comley being a member of the “News” literary staff. The sad intelligence reached the family on Tuesday evening last, in a letter from Lieut. Eric Smallpage (son of Mr. J Smallpage, headmaster of the Birkenhead Institute), who wrote in the absence on sick leave in England of Captain H. E. Barrow M.C. son of Mr. Richard Barrow of “Ellerslie”, Claughton.

Lieut. Smallpage whose letter was couched in very sympathetic terms, stated that on Friday morning, the 11th inst. Gunner Comley (who was in a Light Trench Mortar Battery) and two other soldiers were walking down a trench when a “minnie” fell among them and exploded. All were killed instantly. “I can assure you that your boy felt no pain” the latter stated. “It was all too sudden.”

After referring to Gunner Comley’s good work with the Battery. Lieut. Smallpage added :- “Personally I feel his loss greatly, and trust it will be some slight comfort to you to know that the sympathy of all who knew him is with you in your great sorrow. May we all live and die as he did – a noble Christian gentleman.”

The deceased, who was only 19 years, was educated at Claughton Higher grade School, and at the time of joining the Forces on Feb.14th, 1917, he had been for some years on the staff of the Anchor Line (Henderson Bros. Ltd) in the Cunard Buildings. He was a member of Oxton Road Congregational Church. His Army training was passed chiefly at Prees Heath, with a short spell subsequently on the East Coast, and on attaining his 19th birthday last July he was sent across to France and attached to the King’s Liverpool Regt. Later he was drafted into a Light Trench Mortar Battery, and duly passed his training in that arm of the service, and was in the firing lines during December and the beginning of the present month.

His letters from the front were always characterised by the most bright and cheery spirit, and he was very keen in his military duties. His elder brother, Frank, fought with the 4th Cheshires in Gallipoli, where he was wounded, and after many months of treatment in hospital was discharged from the Army, and returned to civilian duty in the office of Pacific Steam Navigation Company.

The above article refers to Hubert Comley being killed by a "minnie". This was the nickname the Allied Forces gave to a type of trench mortar, used by the German Army called a minenwerfer.