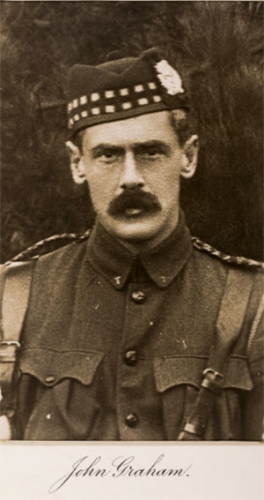 IN A GLORIOUS CHARGE.

By the death of Captain John Graham, of the Liverpool Scottish at the front, news of which was received in Hoylake on Monday, another name is added to the list of world-renowned sportsman who have given their lives for their country. Although a good all-round athlete, it was as a golfer that captain Graham attained to international fame. He had for long being recognised as one of the most brilliant amateurs the royal and ancient game had ever produced.

The gallant officer had been a member of the Liverpool Scottish some years ago, and had concluded his term of service, but on the outbreak of war he re-joined his old battalion as a private, receiving his Commission a few weeks later. He was with the first draft of Liverpool Scottish which went to France in the latter part of last year and attained the rank of captain quite recently while at the front. In Liverpool commercial life he was a well-known figure, having been a director of the firm of Messrs. Macfie, sugar refiners, Morefield's, with which firm his father is also associated. Captain Graham was the president of the sugar association of Lancashire. His father, Mr. John Graham has been honourable treasurer and a director of the above association since it was founded over 35 years ago.

Although he never succeeded in carrying off either the open or amateur golf championship, he was always reckoned by those best competent to judge as one of the great amateur triumvirate of the game, the other two being Mr. John Ball and Mr. Harold Hilton. He made his first appearance in the amateur championship in 1898, when he was 21 years of age, and on that occasion got as far as the fifth round. Two years later, at Sandwich he reached the semi-final for the first time; and on three other occasions, 1901 at St. Andrews, 1905 at Prestwick, and 1908 at Sandwich he repeated that performance. In the Open Championship he finished first amateur in 1904, 1906, and 1907, and was the only amateur who qualified for the last day's play in the open at St. Andrews in 1905. In 1904 and 1914 he won the St. Georges Cup an achievement second only in importance to the amateur championship, and on the second occasion returned the lowest card on record in that particular competition. For ten consecutive years, beginning in 1902, he played for Scotland against England, and lost only one match, that in which he was pitted against Mr Abe Mitchell in 1911 at Prestwick.

He was a member of the Royal Liverpool Club where he figured on plus 5 mark in the distinguished company of Messrs. Ball and Hilton, and held the amateur record for the Hoylake course with 71. His play was marked with perfect ease and grace and although he never liked to be followed by a great crowd of onlookers, there was no player whose style was more delightfully to watch. Quite apart from the brilliance of his performance he was one of the most popular personalities in the world of golf, four he combined infectious enthusiasm with the most winning modesty. At Hoylake he was always spoken of affectionately as Jack or Johnnie Graham

The BN war dairy for the period reads:
From the 10th to the 15th June the Battn was busily engaged in training for an operation to take place on the 16th, particular attention being given to bombing.

On the morning of the 12th June a composite Company under Capt R F B Dickinson attended a ceremonial parade near the camp, where the GOC 3rd Div, General Haldane presented DCMs to NCOs and men of the brigade, Private Howarth of B Coy being one if the recipients of this distinction.

On the evening of the 14th June Major A S Anderson proceeded to RAILWAY WOOD ( which is situated West of BELLEWARD farm and north of Hooge) from which point the 9th Brigade were to attack on the morning of the 16th he took with him 2 men from each company at act as markers and also 2 cyclists.

At 4pm on the afternoon of 15th the Battn left the camping ground near BUSSE BOOM and proceeded via YPRES to RAILWAY WOOD.

16th The attack was made on a frontage of about 1000 yards, the Northumberland, Royal Scots and Royal Fusiliers were detailed to take the first line, we in conjunction with the Lincolns were to take the 2nd line, the 7th Brigade being in reserve.

We were shelled rather heavily between 12.30 and 2.10 am on the morning of the 16th during this time several of our men were killed or wounded.

Our artillery bombardment started at 2.10am and carried out the work of demolition so successfully that little difficulty was experienced in taking the first and second line trenches. Unfortunately however in continuing the advance we suffered many casualties as owing to the difficulty in observing signals it was impossible to keep our shells ahead of the advancing Infantry, although the 3rd line German trenches were reached it was impossible to hold on to them the whole brigade consolidated the 1st part of the 2nd line German trench, manning them until 11.30pm on the night of the 16th at which point they were relieved by the 8th Brigade.

The casualties amongst our officers were particularly heavy of the 24 officers who went up only Lt Wall, 2nd Lt Roddick and Lt Chavasse came back unscathed.

The work of all ranks throughout the day calls for the highest praise our bombing parties doing particularly good work. The stretcher bearers throughout a most trying day did excellent work and showed great courage in attending to so many wounded under heavy shell fire.

The diary ends with the following.

The following is an extract from a special order by Major General Haldane Commanding 3rd Div published on the 17th June. The Major General commanding cannot adequately express his admiration for the gallant manner in which the attack was carried yesterday. The dash and determination of all ranks was beyond praise, and that some actually reached the objective in the first push and remained there under most trying circumstances is proof of their superiority over the German infantry, that the captured could not all be held is disappointing, more especially as the losses incurred were heavy, but these casualties have not been in vain.