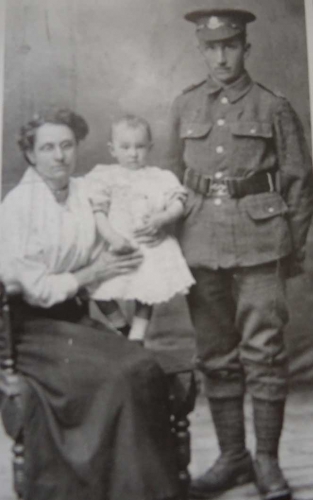 Born in 1887 in Cuddington near Northwich, John Garner was one of five children born to Parents William and Mary Jane. Together with his four sisters, he lived a comfortable life on a large farm. His father was a cattle dealer, a trade John would follow on leaving school.

He married Ethel May White and moved into her parent’s home at Groves Farm, Batherton. According to the 1911 census return there were ten family members living at the farm:

John enlisted and was posted to 11th (Service) Battalion Cheshire Regiment. He entered the theatre of war in 1916. He left Ethel not only caring for the farm but also their young daughter Bessie.

The 11th (Service) Battalion, Cheshire Regiment was raised in Chester on the 17th of September 1914 as part of Kitchener's Third New Army and joined 75th Brigade, 25th Division. They trained at Codford St Mary and spent the winter in billets in Bournemouth. They moved to Aldershot for final training in May 1915 and proceeded to France on the 26th of September, the division concentrating in the area of Nieppe. On the 26th of October they transferred to 7th Brigade still with 25th Division. Their first action was in defence of the German attack on Vimy Ridge in May 1916.

In 1918 they were in action on The Somme, in the Battles of the Lys suffering heavy lossed. On the 17th of June 1918 the battalion was reduced to cadre strength with many troops transferring to the 1/6th Cheshire Regiment. On the 23rd of June the cadre transferred to 39th Division and on the 3rd of August was disbanded in France.

During action around the Belgian city of Ypres in April 1918 John was listed as missing presumed killed. His body was never found. He is commemorated on the Tyne Cot memorial to the missing in Zonnebeke, Belgium (panels 61-63)

John is also commemorated on the war memorials in the villages of Wybunbury, Alpraham and Bickerton.

His brother in laws John and Thomas would both die during the war.

Thank you to Joy Bratherton for the information and picture of John, with his wife Ethel and thier daughter Bessie.