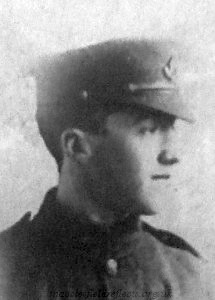 Harry Bull was baptised on 18 April 1897 at St John's Church, Macclesfield, the son of Annie and George Henry Bull, a joiner of 66 Crossall St, Macclesfield. By 1901 Harry's father had died and four-year-old Harry was living with his mother and seven-year-old sister Nellie at 19 Park Street, Macclesfield, with his grandparents Alice and Samuel Bull and their three children.

By 1911 Harry was living with his sister and widowed mother at 7 Hope Street, Macclesfield, and employed as a lithographer.

In 1915 Harry enlisted into the Cheshire Regiment with service number 4078, but he later served with the King's (Liverpool Regiment).

Harry was reported missing in the Macclesfield Advertiser on 9 November 1917:

Lance-Corpl Harry Bull, King's Liverpool Regiment, son of the late Mr G H Bull, Park Street, Macclesfield, and grandson of Mr Samuel Bull, builder and contractor, has been missing since August 1st.  The lance-corporal was in his 21st year and was educated at Lord Street School. He enlisted two years ago, and had been in France about 12 months. He was connected with park Street Chapel and Sunday School, and prior to joining the army assisted his grandfather in the business.

L/Cpl Harry Bull has no known grave and is commemorated on Panel Ref. 4 and 6 of the Ypres (Menin Gate) Memorial in Belgium. The Commonwealth War Graves Commission holds casualty details for L/Cpl Harry Bull, and he is listed on the Imperial War Museum’s Lives of the First World War website.

With thanks to Mr Hadfield for the photograph of Harry Bull.