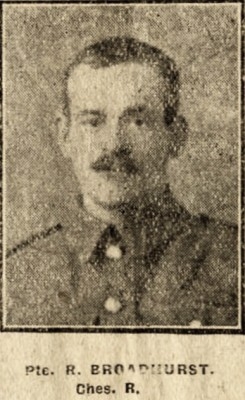 Ten years later Ralph and his father had moved to 2 Baker Street, Macclesfield, while his mother and sister Mary continued to live at 41 Barton Street.

Ralph's death was reported in the Macclesfield Times on 13 April 1917:

Official news has come to hand of the death in action at the battle of Gaza on March 26th of Private Ralph Broadhurst, Cheshire Regt, son of Mr R Broadhurst, 6 Baker St, off Crompton Road, Macclesfield. Private Broadhurst was 30 years of age and a native of Macclesfield. He was educated at Crompton Road Day School and attended the Church there. Enlisting in the local Territorials nearly two years ago, he was drafted out to Egypt twelve months later. Prior to enlistment the deceased soldier was employed by the Cheshire County Council as a roadmaker. His nephew, Private W Biddulph, is serving in the Army.