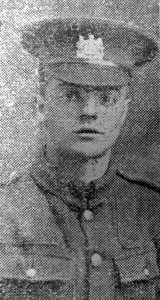 James William Bracegirdle was born in Macclesfield, Cheshire in 1897, the son of Sarah Annie (née Oliver) and John Bracegirdle, a cotton weaver.

James enlisted in Macclesfield, joining the Manchester Regiment, and was drafted overseas in 1916. He was wounded in the arms, legs and spine in November 1918 and taken to No 11 Stationary Hospital, Rouen, but died of his injuries a few days later on 12 November 1918.

Private Bracegirdle's death was reported in the Macclesfield Times on Friday 22 November 1918:

PTE JAMES WILLIAM BRACEGIRDLE, 9th Manchesters, only son of Mrs Bracegirdle, Brunswick Street, Macclesfield, died in the No 11 Stationary Hospital, Rouen, on the 12th inst, as the result of wounds sustained a few days ago. He was 21 years of age and during his period of service in France - two years - had been servant to Captain Bagshaw. Deceased enlisted in 1915, up to which time he was employed as a grocer's assistant by Messrs Burdin, Mill Street, Macclesfield. Pte Bracegirdle was educated at Christ Church School and attended the Trinity Wesleyan Chapel, where he was an enthusiastic worker, being a teacher in the Sunday School and a member of the committee. A memorial service is being arranged.

Sympathetic letters have been received by his sorrowing mother from Captain Bagshaw and others who came into contact with him. Rev G A Johnson, chaplain to the forces, writes: "Your son was badly wounded in both arms and legs. I thought at first he would do well and he was confident himself, but blood-poisoning set in and he gradually sank under. It is very sad that, at this time of general rejoicing, your day should be darkened with this great sorrow... The funeral took place with military honours in the cemetery at Rouen." A letter from the matron of the hospital states: "Your son's injuries were very serious, the spine being affected and he sank very rapidly, dying most peacefully. He did not realise he was dying and was unconscious during his last hours, so did not suffer." His last resting-place is in the cemetery near the hospital and the matron adds: "The graves of our gallant men are beautifully kept and all registered, so that any grave can be found easily at a future time...."

Private James Bracegirdle is buried in grave ref. S. II. LL. 25 at St. Sever Cemetery Extension, Rouen, France. His mother asked for the words “AT REST” to be engraved on his headstone. The Commonwealth War Graves Commission holds casualty details for Private James Bracegirdle, and he is listed on the Imperial War Museum's Lives of the First World War website.