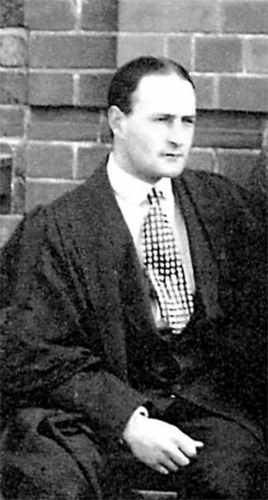 John was born on the 18th November 1887 in Leckhampton, Cheltenham, Gloucestershire. His parents were Howard Conway Abell and Eleanor Hannah, sadly his mother Eleanor passed away on the 20th November of that same year. His father Howard (1861 – 1924) was born in Gloucestershire, he worked as a mechanical engineer, he came from a privileged background, he was the great-great grandson of Sir Charles Asgill and Sarah Teresa Pratviel. His mother Eleanor came from a military family, her father John Simpson Howard was a surgeon of the India medical Office, Eleanor was born in India as were many of her siblings.

John had an elder brother, Edward Lloyd Howard Abell he was born February 25th, 1885. Edward emigrated to Canada when he was about 19 years old.

From 1897 to 1901 John attended Crypt Grammar School, after he spent one year at the Weston College, he stayed on at Weston College as a student teacher until 1906. In 1907 he spent half a year at Long Ashton School and then moved to Redland House School in Bristol.

He joined Wallasey Grammar School on the 20th September 1909, he became a form master, by 1914 John’s was earning around £150 per year. John attested and joined the Cheshire Regiment September 1914, it was shortly after he applied for a commission, on the 30th September he was posted to the 11th Cheshire’s at Codford Camp.

The battalion sailed from Southampton to Le Havre on the 25th September 1915, by the 30th they took up positions North East of Ploegsteert Wood, they would stay in this area until late January 1916. By the 1st July 1916 they were on the Somme.

On the 24th June 1916 the war diary for the battalion mentions Captain Abell, it states, On the 24th Capt. J H L Abell was reprimanded by the G.O.C Division for writing a letter of an insubordinate character to his commanding officer. Capt Abell was warned that a repetition of the offence would entail trail by court martial.

Nine days after the reprimand John was killed in action when the 11th battalion went into action near to Leipzig Redoubt, Thiepval.

On immediately visiting the companies the adjutant found that a considerable number of casualties had occurred during entrance to the assembly positions, that the British trenches were devoid of British troops and that the guides had no instructions other than to lead the companies to some particular spot in the trenches. How much of the trench each company was to occupy was left to the imagination, no further relief of troops in fact had taken place. By about 5:30 am the companies had more or less taken up some portion of the trenches and got in touch with me. The trenches were exceedingly badly knocked about, affording little cover from fire and in a great many places little cover from view. Steps were taken to organise the bombers and to account where the dumps were to ensure a supply of bombs to the companies. At about 6:20 am the Border Regt. on the left of the battalion (with whom touch had been made) attacked the German positions but by whose orders is not known. The right flank of the Borders being enforced, the leading companies of the Cheshire’s immediately attacked, and the assaulting waves passed over No MAN’S LAND in perfect order. Word to this effect was immediately sent to the Commanding Officer who at once proceeded to the scene of action. The assaulting troops very soon came under a withering fire from machine guns, which made the ground at about 50 yards from the first German line absolutely impassable, line after line of the troops were mown down. The commanding officer who went with the reserve company was unfortunately killed and Captain Hill, the adjutant on whom the command of the Battalion devolved decided to get the men still living back into the trench from which they jumped off and to hold it as a defensive line. The remainder of the day was spent in trench warfare and carrying up wounded and other casualties. Unfortunately, the list of casualties was large and included every Company Commander. 20 Officers and 657 Other Ranks entered the trenches on 3rd and of that number 6 Officers and 350 Other Ranks came out on the night of the 4th. On the night of the 3rd the battalion under orders from Brigade moved further North by about 300 yards and held another section from STAFFA ST. to TYNDRUM ST. linking up with the 8th Border Regiment, the place of the 11th Cheshire’s being filled by the 1st Wiltshire Regt. During the night of 3rd- 4th the section of the trench held by the battalion was heavily shelled. On the afternoon of the 4th the Cheshire’s were relieved by the 1st Wiltshire Regt. 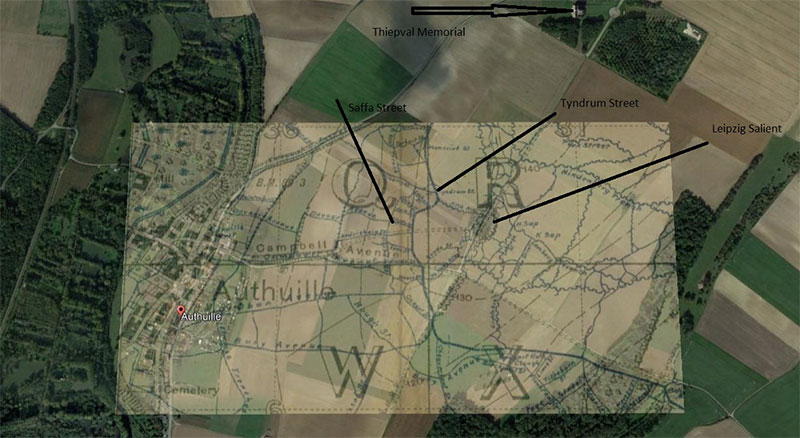 The overlay shows the area where John fell, the war diary indicates that the battalion moved 300 yards north on the evening of the 3rd and took up the line between Staffa St. and Tyndrum St.