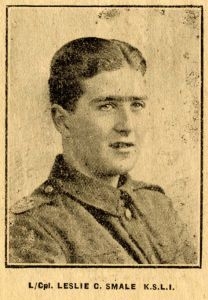 Leslie Crozier Smale was baptised on 13th October 1896 at Hurdsfield Holy Trinity Church, the only son of Grace and Harry Edgar Smale, a solicitor of Hurdsfield Cottage, Hurdsfield Road, Macclesfield. Harry and Grace were married at Christ Church in 1893; Harry was the son of John Smale, silk manufacturer of Macclesfield, and Grace was the daughter of John Jackson, headmaster of the Macclesfield Modern School for forty years.

Leslie was educated at Macclesfield Grammar School and from there entered Shrewsbury School in 1911.

Leslie was still a pupil at Shrewsbury School when war was declared in August 1914, and joined his local regiment, the 5th Battalion of the King's Shropshire Light Infantry, on 5th October 1914, along with 40 other old Salopians. Whilst undergoing training at Aldershot he was awarded the Battalion prize for quick firing.

Leslie went out to France on 22nd May 1915 and was wounded in July, but not seriously and he was soon able to rejoin his regiment. He took part in the battle of Loos, and was reported missing on 25th September 1915, having last been seen wounded near the German lines. No further news having been received, his parents were officially notified one year later that he was presumed to have been killed in action on or after this date. His death was reported in the Macclesfield Times on 6 October 1916.

MR LESLIE CROZIER SMALE: ANOTHER WAR OFFICE COMMUNICATION - We regret to state that Mr and Mrs H E Smale, Hurdsfield Cottage, Macclesfield, have received an official notification that the death has now been presumed of their only surviving son, Mr Leslie Crozier Smale (aged 19), who was missing since the battle of Loos, September 25th, last year.

Mr Leslie Smale - a grandson of the late Mr John Smale, C.C., on his father's side and of Mr John Jackson, for many years headmaster of the Modern School on his mother's side - was an old Shrewsbury boy, and on October 5th, 1914, he joined the 5th Battalion of the King's Shropshire Light Infantry, along with 40 other patriotic old Salopians. He went out to France in May of last year, and a couple of months later was wounded, but not seriously. He quickly returned to trench duty, and took part with his regiment in the Loos offensive.

Although his OTC training and education would have assured Mr Smale of a commission had he cared to take one, he preferred to share the lot of the ordinary soldier along with his old school friends. He had received his first promotion while in France, and at the time he was reported missing held the rank of Lance-Corporal.

The last news which reached Mr and Mrs Smale was that their son had been seen wounded near the German lines, and beyond this nothing has reached them. He may, of course, have been made a prisoner of war; and, in the absence of any further details, Mr and Mrs Smale are reluctant to regard the War Office notification as conclusive.

Private Leslie Smale has no known grave and is commemorated on panel ref. 47 and 49 of the Menin Gate memorial at Ypres in Belgium. The Commonwealth War Graves Commission holds casualty details for Private Leslie Smale, and he is listed on the Imperial War Museum’s Lives of the First World War website.

Elsewhere, he is commemorated on the Shrewsbury School war memorial.