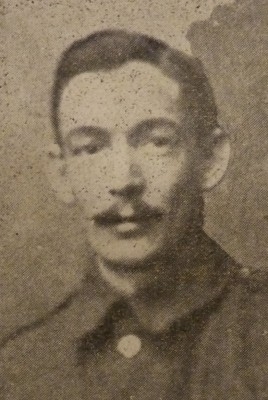 Harry Gee was born in Macclesfield in 1888, the eldest son of Emma Alice (née Buckley) and Henry Gee, a silk weaver. Initially, the family resided at 1 Norbury Street, Macclesfield.

Harry's mother died in 1910 and a few months later his father married Sarah Ann Siddons. In 1911 the couple were living at 24 Pickford Street, Macclesfield.

Harry joined the local Militia (4th Cheshire Regiment) for a term of six years on 16th April 1904 at the age of 17 years 9 months. He gave his address as 19 Church Street West and said that he worked as a silk piecer for Mr A. Massey at Crompton Road. He was described as 5 feet 2 inches tall, weighed 101 pounds and had a 32 inch chest, with a fresh complexion, brown eyes, dark brown hair and had a scar on his right cheek. Harry attended the recruits musketry training in 1904, and was present at the annual training camps in 1904 and 1905.

On 3rd October 1905, Harry transferred to the regular army on a 7+5 term of service (i.e. 7 years active service plus 5 years reserve). Following his initial training he was posted to British India with the 2nd Battalion, Cheshire Regiment, where he is listed in the 1911 census.

At the time war broke out, Private Harry Gee and the 2nd Cheshires were stationed at Jubbulpore and had been in India for four years. After the declaration of war in August 1914, they were immediately ordered home. Following a train journey to Bombay the Battalion embarked in the S.S. "Braemar Castle", arriving back in Britain on Christmas Eve 1914. By 16th January 1915, the Battalion was ready to leave for the Front and embarked for Le Havre from Southampton aboard the requisitioned cattle boat S.S. "City of Chester".

It must have been something of a culture shock for Harry and his comrades... in place of the heat and drought of India, they had to contend with the cold, wet and mud in the confinement of their newly dug trenches - conditions that would become  synonymous with the Western Front.

By 5th February 1915, the 2nd Cheshires were occupying positions at Blauwepoort Farm, facing the Ypres Salient, just south of the town centre of Ypres in West Flanders. It was probably here that Harry Gee was killed on 7th February 1915.

Harry's death was reported in the Macclesfield Times on 12 March 1915:

News has been received by a friend that Private Harry Gee, a Macclesfield man in the 2nd Battalion Cheshire Regiment, was killed in action early in February.

Private Gee joined the Army about nine years ago, and after twelve months' training went out to India, where he was stationed up to the outbreak of war. He arrived back in England at the latter end of December and spent a few days' furlough in Macclesfield before going out to the front. His comrade was Drummer Harry Haye, of 28 George Street West, and both went out to the front on 19th January. Private Gee was soon in the trenches and on or about 4th February he sustained a fatal wound.

Private Harry Gee has no known grave and is commemorated on Panel 19-22 of the Ypres (Menin Gate) Memorial in Belgium. The Commonwealth War Graves Commission holds casualty details for Private Harry Gee, and he is listed on the Imperial War Museum's Lives of the First World War website.

Harry Gee was the brother of Lance Corporal Oswald Gee, 9997 1st Battalion Royal Welsh Fusiliers, who was killed in action in France on 25th November 1915; and Private Wallace Gee, 27256 Manchester Regiment, who enlisted on 11 December 1915 and received a medical discharge with a Silver War Badge on 7th July 1916.