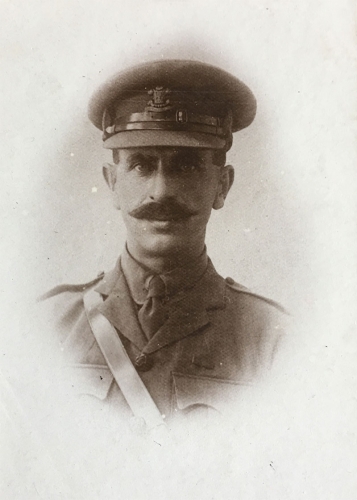 Second Lieutenant Charles Ernest Postles took part and died of wounds received the same day during the Battle of Albert, on the night of the 20/21 St of August 1918. The 1st Battalion, The Cheshire Regiment marched to its assembly position west of Bucquoy, being guided into position by the men of the New Zealand Division, who were holding this part of the line. The 1st Battalion's objective was the railway line south east of Achiet le Petit. Starting just before dawn, under a very heavy barrage, the infantry advance began in pitch darkness and a heavy ground mist which made co-operation and maintenance of direction difficult. The 1st Battalion had followed the advance by compass bearing with great difficulty. A pause of half- an- hour allowed them to form up for their attack on Achiet le Petit. The advance then began, as they had passed beyond range of the artillery, and none had been pushed forward there was no artillery support, but six tanks moved with them. It was now broad daylight, but the fog still held, and a road led straight to the objective. Achiet le Petit was captured without very heavy casualties. They then pushed on through the village to the final objective, the railway line. As the Battalion left the village, the fog lifted, and they came under very heavy machine gun fire from beyond the railway line and from both flanks. This did not stop them from fighting their way up the hill and reaching the railway and holding it. The tanks had moved round to the left of the ridge, but most of them were knocked out before they could support the leading troops. Patrols were pushed forward at once 600 yards ahead and it was found that touch had been lost with the Royal Naval Division on the left and it was also learned that the Royal Warwickshire's were ahead of troops on their right, the others were lost in the fog. Inside 15 minutes of the Battalion reaching the objective, the usual determined counterattack was made, mainly on the left flank, and was successfully repulsed. The retirement was carried out under very heavy machine gun fire from three directions. The Battalion went into action 600 strong and lost no less than 300 killed and wounded on the day. The Battalion was relieved in the evening.


The Cheshire Roll of Honour would like to thank Anthony Good, Charles grandson for the picture and John and Christopher Pullen for the supporting information.