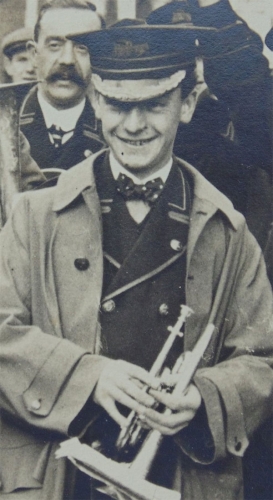 Edwin was born at Skipton on 23rd December 1888 into a banding family.  His grandfather, Greenwood Firth, had been solo trombone with Black Dyke for twenty-five years, while his father Squire Firth had been a cornet player with the same band.

It was hardly surprising that Edwin learned to play the cornet as a lad and in 1899 joined the Skipton Band.  By 1902, at the age of thirteen he was Principal Cornet with the Band when they played at the famous Crystal Palace contest.  As something of a 'boy wonder', Edwin received many invitations to appear as a guest soloist and was able to use the money to pay for private tuition from William Rimmer and Alexander Owen, the greatest teachers of their day.

He sharpened his skills in solo contests and won his first significant contest in adult company at Bradford in 1904.  Medals, Cups and Trophies came Edwin's way most weekends, while he was engaged for a week at Rochdale Circus & Hippodrome where he was billed as 'Master Edwin Firth - Champion Boy Cornetist, Prize Winner and Gold Medallist - A Musical Marvel'. 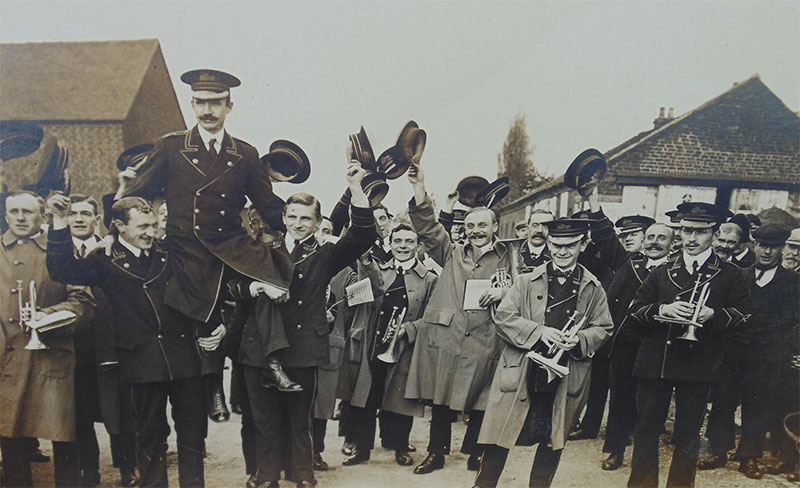 In 1908 he attended two solo contests each of which was, in its own way, to influence the remainder of Edwin's life.  The first was at the Shoulder of Mutton Inn at Mytholmroyd in an open contest which attracted twenty-four entrants.  A report in the local Press said, 'the playing was splendid and a revelation to the audience'.  The result was:

No-one at that time could possibly have foreseen how that trio was to eventually serve Foden’s Band for an aggregate of over eighty years.

The Great War was well into its third year when Edwin decided, quite voluntarily, that he should fight for his King and Country.  So, in 1917 he became Private Edwin Firth of the 28th London Regiment (The Artists' Rifles)

At first, he was able to get home for some weekends.  One such occasion was at the end of 1917 when the Band had an engagement in Chester.  With his Commander's permission, Edwin took part and enthralled the audience with his playing.  Naturally an encore to his solo was called for and knowing that his departure for the Front was imminent, decided that Tosti's Goodbye would be appropriate.  His fellow bandsmen sought to talk him out of this choice, seeing it as an ill omen, but Edwin was resolute.  It was to be the last formal concert and solo of his great career.

In February 1918 Edwin's Regiment was posted out to France, where he naturally took with him a cornet.  Not his best one which had been a gift to his father from the Skipton Band, nor the little slide cornet his wife had bought for him to play novelty solos.  Instead he took an old unplated one from the band room cupboard.  It would be good enough to keep his lip in, and anyway the War would soon be over.

On 1st June 1918, just a few short months before the Armistice, Edwin's Regiment was at Varennes, north west of Amiens.  Edwin's Platoon had finished its spell of duty in the trenches and on this particular night it was his turn to act as guide to bring in the relieving party.  Edwin safely made their base but, on the journey, back to the trenches, just as they came out of a wood, a shell exploded killing Edwin and most of his comrades - he was only 29.

Eight weeks earlier a son, Edwin Twemlow Firth, was born to his wife Doris; a son he was destined never to see.  (For the record Doris died on 31st December 1991, just a month short of her 99th birthday; she never remarried.)

Tom Hynes, Bandmaster at Fodens wrote "Our Bandsmen are grief stricken at the loss of dear Edwin Firth.  A better or kinder boy never lived.  He was beloved by all who came into contact with him and was a favourite everywhere.  His wonderful playing with our Band, and his modest and genial bearing, will never to be forgotten.  The loss to our Band, and the band world in general, is a great one.  He was a true artist and a gentleman."

Edwin was buried in the Varennes Military Cemetery at Albert, near Amiens in the Somme region of France along with 1,218 other Allied soldiers.  Some years ago, my wife and I went to seek out Edwin's grave.  Like all the other Military Cemeteries there is an index book to the graves in a brick pillar near to the entrance.  In it was printed 'Private Edwin Firth 766890, son of Squire and Clara Firth of Earby, Yorkshire, husband of Doris S Firth of Springfield, Sandbach, Cheshire.'

On 1st June 2018, a delegation of the Brass Band of Amiens (Orchestre de Cuivres d'Amiens) and members of the association House of Australians (Maison des Australiens) held a remembrance ceremony at Varennes British cemetery in memory of Edwin Firth, principal cornet player of Fodens Motor Works Brass Band, killed in action in this French village, on 1st June 1918. Veteran, Flag bearer, municipal councillors and Lady Mayor of Varennes, were present, to share this moving moment.

The same day, at the same time, Fodens Brass Band members and the family of Edwin did the same in front of the memorial in the town of Sandbach, UK. The French ceremony started by the obituary of Edwin, told by Eric Brisse, MC, OCA Conductor, and MDA Chairman.

Then, Maurice Fourdrinier, OCA Chairman, presented the memory plaque and the Union Jack flag, in front of the grave, on behalf of the French Band. 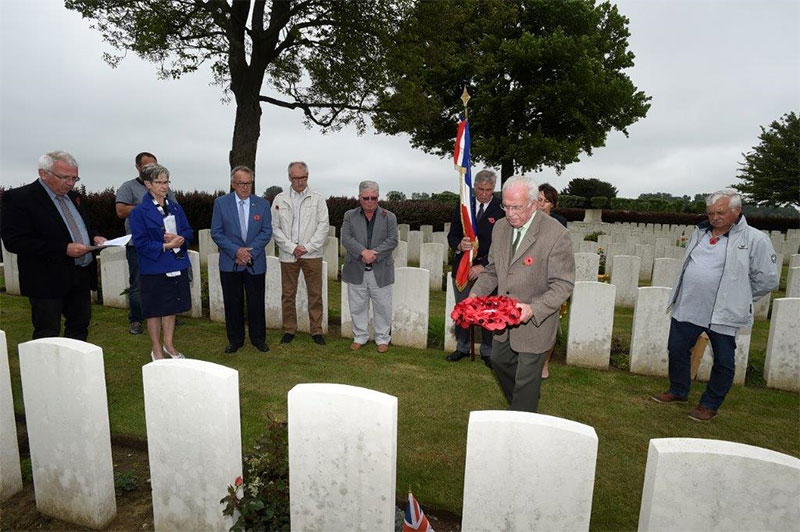 After the flag up, Eric Brisse, thanked all the people who came to share this French tribute.

How many broken destinies of artists, such as Edwin, and indeed, all those people whose stories we do not know?

Rest In Peace Edwin, and Lest we forget. 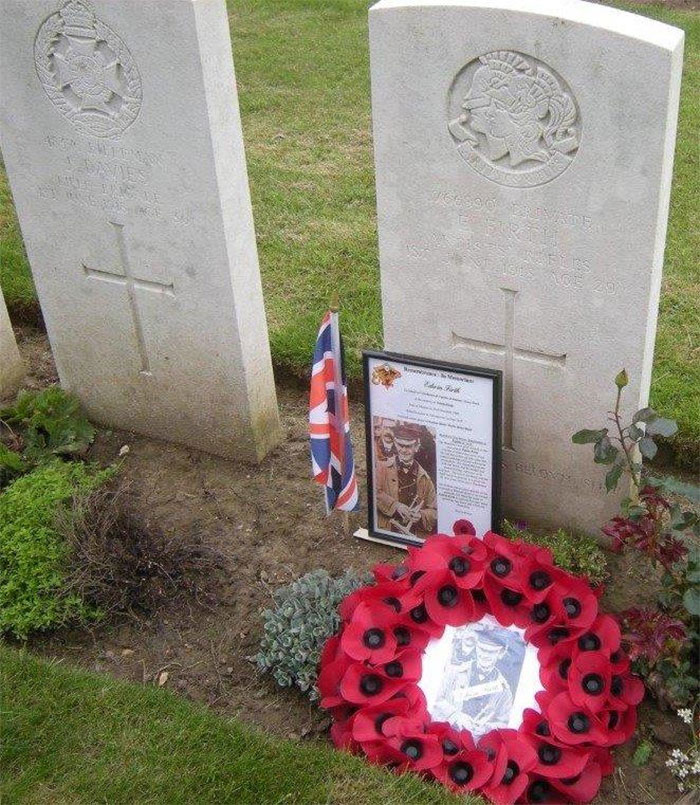 For this information and pictures, The Cheshire Roll of Honour would like to thank Eric Brisse, Professor of French Horn at the Amiens Conservatory and Principal French Horn at the Orchestre Philharmonique du département de l’Oise.