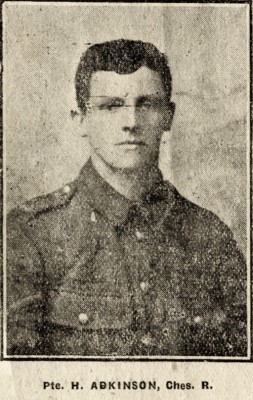 Harry Adkinson was born in 1888 in Macclesfield, the son of John James and Emily Adkinson, who were living at 133, High Street, Macclesfield in 1891.

By 1901, the family had moved to 26 North Street, and Harry was working as an errand boy. When Harry married Jane (Jessie) Savage at St George’s Church, Sutton on 23rd January 1909, he was living at 10 North Street. Their son, also named Harry, was born later that year.

Harry served with the 1/7th Cheshire Regiment (Territorial Force) for six years prior to the outbreak of war and was recalled immediately. He transferred to the 5th Cheshire Regiment in January 1915 and was drafted to France, landing there on 15th February 1915. The Battalion went to the Ypres Salient; they were initially attached to the 14th Brigade, but were systematically introduced to war conditions by stages, until they were fit to be entrusted with their own section and during the period 22nd February to 6th April, the 5th Battalion was in trenches in the area of battle.

Harry was recorded by the 14th Field Ambulance as having received a gun shot wound to his left arm on 18th March 1915. He was transferred to No. 8 Casualty Clearing Hospital in Bailleul, where he died from his wounds the following day, 19th March 1915, aged 27 years.

The Macclesfield Express published an article about the Adkinson family in October 2014.