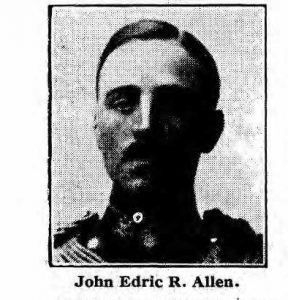 Born on the 3rd August 1890 at Heaton Chapel, John was the eldest son of John and Blanche Allen of Davenham Hall, Northwich. John Snr was the senior proprietor of The Manchester Evening News.

John was educated at Wellington College and at Trinity College, Cambridge. He was gazetted second Lieutenant on the 19th August 1913. He sent in his resignation together with all the other officers at the time of the ‘Curragh Incident’ in March 1914 but went out to France with his regiment as part of British Expeditionary Force in August. He was promoted to Lieutenant on the 10th October 1914. He fought through the retreat from Mons and up until he was wounded in the trenches on February 21st 1915.

The war dairy for that day reads:
21st Feb 6am: At 6am the enemy exploded a mine. This explosion was followed by two others at about two second Intervals all in the vicinity of the trench occupied by D Squadron. Enemy at once rushed the trench and attempted to make their way down our line of trenches to the left and our right, close fighting ensued. Enemy were definitely stopped shortly before they reached the centre communication trench by the gallant conduct of A Squadron and one troop of C squadron aided by the M.G.

He returned to the Front in November 1915, he was promoted to Captain on the 19th January 1918 and was with the regiment until he was wounded while leading an attack on a German machine gun on March 30th 1918 near Moreuil.

The regiment was relieved at 10pm and went to Thennes where they remained standing to all night.

John died of his wounds nine days later in hospital at Rouen on April 8th 1918.