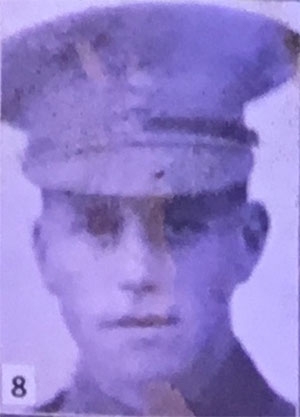 Turner Russell Walker was born in Birkenhead 7th November 1893. He was the only son of James Watt Walker and his wife Mary Frances who lived at "Yenda", 51 West Bank road, Devonshire Park, Birkenhead after the war. The 1911 census however shows the family living at 62 Park Road South, Birkenhead, at the time the house was owned by Turner’s grandfather, Turner Russell age 78 and listed as a Master Mariner. Turner’s father who was also a Master Mariner in the Mercantile Mariner is listed as a widower; he is was reported to be a direct descendant of James Watt the famous engineer. On completion of his schooling Turner joined the Holt Shipping Line as a clerk. He enlisted in Liverpool 3rd September 1914 and his enlistment papers confirm his occupation as a clerk. He was commissioned into his Battalion as a 2nd Lieutenant on the 7th April 1915, but remained in the UK, to take a signaling course, when the 18th Battalion embarked for France on the 7th November 1915 and joined his Battalion in the Field on 15th March 1916. Turner Russell was in command of a Platoon for the attack on the 1st July 1916, and was badly wounded during the advance and was attended to by stretcher bearers who dressed his wounds and placed him on a stretcher to take him to 97 Field Ambulance where he died the same day.

The War Diary for the day simply states:

07:30 Zero - battalion commenced to leave their trenches and attack commenced - the attack was pressed with great spirit and determination in spite of heavy shelling and machine gun enfilade fire which caused casualties amounting to 2/3rds of the strenght of the battalion in action - the whole system of the German trenches including the Glatz Redoubt were captured without deviation from the scheduled programme.

In a letter to his father at the time, his death was described as follows: "It appears that your son was badly wounded on July 1st (the day of the advance). He was dressed on the battlefield by the stretcher bearers but died on his way to the proper dressing station. He was buried by the Chaplain of The Wiltshire Regiment along with 14 others at the foot of a little wood on the side of a hill. In happier times, it would be a beautiful spot. A large cross bearing all the names, marks the grave, and later on, each grave will have its own cross."

This initial burying place was Talus Boise British Cemetery, his remains were exhumed soon after the war and reburied in Peronne Road Cemetery, Maricourt, France.

His headstone bears the private inscription "Teach Us the Joy of Duty Nobly Done."

In 1917 the probate register shows that Turner had effects of £98 7s 10d which went to his father James Watt Walker.

The Cheshire Roll of Honour would like to thank Tony Waddington. Liverpool Pals for contributing to this page on Turner.