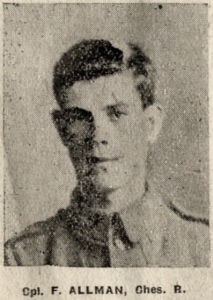 Frank Allman was born in Macclesfield in 1892, the son of Ann and James Allman, a farm labourer. In 1901, nine year old Frank was living at 46 Stanley Street with his parents and siblings William (21), Walter (17) and George (6) - the family name was recorded as 'Ormond'.

Frank's mother died between 1901 and 1911, when his widowed father was employed as a servant and deputy boarding house keeper for Mrs Sharratt at 38-40 Duke Street, Macclesfield, living there with his sons Walter and George. Frank's father later lived at 7 Bank Place, and subsequently moved to 70 Elizabeth Street, Macclesfield.

Frank Allman enlisted in the Cheshire Regiment in 1910 and after six months training was sent to join the regiment in India. When war was declared, the 2nd Battalion of the Cheshire Regiment was in Jubbulpore, India, and they returned to England, landing at Devonport on 24 December 1914. The Battalion went to Winchester, where they formed part of the 84th Brigade, 28th Division, and immediately prepared to go to France, landing at Le Havre on 17 January 1915.

Frank was wounded twice in June 1915, and on the second occasion was granted 13 days leave, during which he visited his family in Macclesfield.

The 2nd Battalion of the Cheshire Regiment participated in the battle of Loos, which was intended to result in the capture of the German positions from Loos to the La Bassee Canal. On the 3rd October, the Germans attacked all along the line of the 84th Brigade, but were repulsed except on the left where they gained a footing. A bayonet counter attack was met with a hail of bombs and driven back to the British front line. Frank died during this action on 3rd October 1915.

Franks' death was reported in the Macclesfield Times newspaper of 29th October, 1915:

Another Macclesfield soldier to lay down his life for King and Country is Corporal Frank Allman, 2nd Cheshire Regiment, son of Mr James Allman, 7 Bank Place, Bank Street, Macclesfield. The intimation came from the War Office, and stated that he had been killed in action in France.

Mrs Parry, 13 Derby Street, Macclesfield, with whom Corpl. Allman formerly resided, has received a letter from Sergeant Virgo, 4th Batt. Grenadier Guards, enclosing some photographs with her address, found on the battlefield. He says they were taken from the pocket of "some poor hero who lay in front of our trenches, for identification previous to our burying him". There is no doubt that the body was that of Corporal Allman, as the enclosures referred to included portraits of Mrs Parry and other local people.

Corporal Frank Allman has no known grave and is commemorated on the Addenda Panel of the Loos Memorial at Pas-de-Calais, France. The Commonwealth War Graves Commission holds casualty details for Corporal Frank Allman, and he is listed on the Imperial War Museum’s Lives of the First World War website.

The floral tributes laid when the Macclesfield Park Green War Memorial was unveiled on 21st September 1921 included one with the words “In fond remembrance of George, Frank, and Fred Allman, from father, brother and family.”