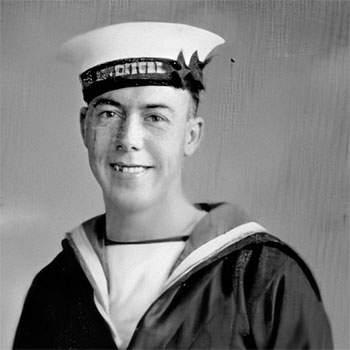 He worked as an employee of Lever Brothers, Port Sunlight and for four years was an Able Seaman in the Merchant Division of the RNVR.  He was called up for active service in August 1939.

On 11th\12th November 1939 his ship, H.M.S. Adventure, a mine layer, left the Humber to return to Portsmouth having run out of mines and to collect another cargo of mines.  Owing to very thick fog she had to anchor off Grimsby and again further south, before getting under way again in the early hours of the morning of 13th.  At about 6.30 a.m. there was a violent explosion.  This was probably off the Essex coast.  There was much damage and there were reported to be about 100 casualties out of about 400 crew, including about 24 deaths.  Harold was one of those who were killed.  His grave in Bebington Cemetery and is also the resting place of his mother and father.

Accounts vary in suggesting it was either an acoustic mine, or a new type of German magnetic mine or even one of her own mines.  It is interesting to note that newspaper and magazine reports covering Harold’s death describe the incident as “an accident”. 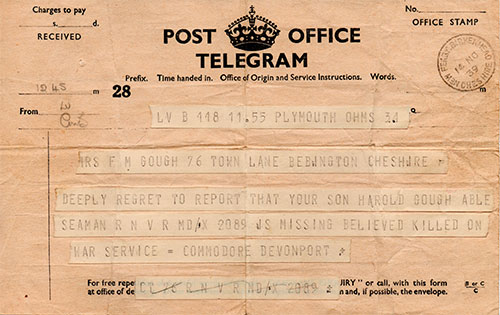 Below is another account of the movements of the ship

16th        Withdrawn from this operation because of manoeuvring problems in Dover harbour.

25th        After delay because of lack of escorts completed first lay.

30th        Laid Dummy mines off East coast when on passage to Rosyth.

11th        Transferred to Portsmouth prior to minelaying operation off Dutch coast.

Escorted on passage by HM Destroyers BLANCHE and BASILISK.

24 of ship's company killed or missing and 69 wounded.

HMS BLANCHE was mined whilst standing by and later sank in tow. 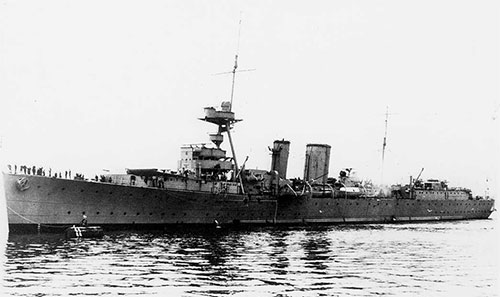 Harold had been due to marry his fiancée, Miss Florence England at Christmas.

Shortly before he was killed on board HMS Adventure Harold wrote this letter to his sister, Lallie (Mr & Mrs J Weaver).  He headed it Tuesday but wrote that it was actually Monday night.  In it he noted that “they got the (HMS) Courageous today”.   HMS Courageous was sunk on Sunday 17th September 1939.  So, we can deduce that he was probably writing the letter on Sunday into Monday 18th September 1939. 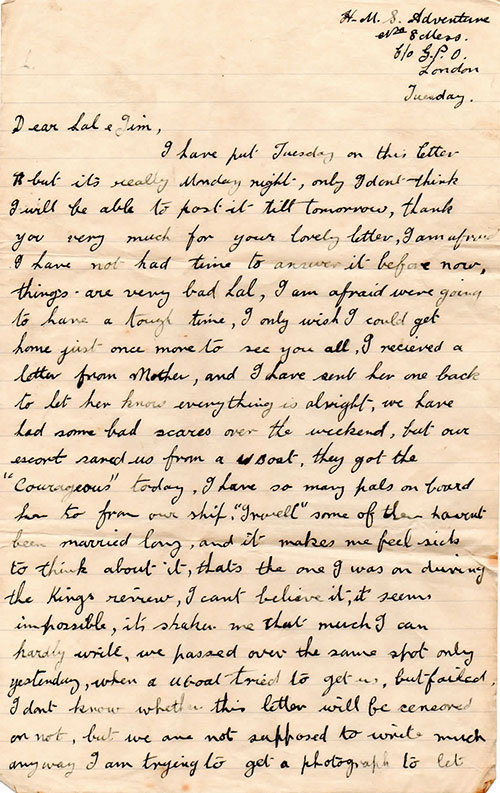 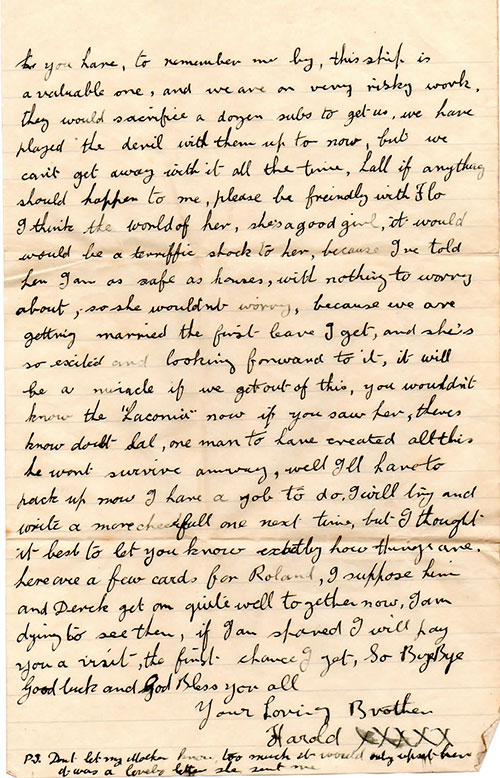 I have put Tuesday on this letter but its really Monday night, Only I don’t think I will be able to post till tomorrow, thank you very much for your lovely letter, I am afraid I have not had time to answer it before now, things are very bad Lal, I am afraid were going to have a tough time, I only wish I could get home just once more to see you all. I received a letter from mother, and I have sent her one back to let her know everything is alright, we have had some bad scares over the weekend, but our escort saved us from a U-Boat, they got the “Courageous” today, I have so many pals on board, some to from our ship “Gravell” some of them haven’t been married long, and it makes me feel sick to think about it, that’s the one I was on during the Kings Review, I can’t believe it, it seems impossible, its shaken me that much I can hardly write, we passed over the same spot only yesterday, when a U-boat tried to get us, but failed. I don’t know whether this letter will be censored or not, but we are not supposed to write much, anyway I am trying to get a photograph to let you have, to remember me by, this ship is valuable one, and we are on very risky work, they would sacrifice a dozen subs to get us, we have played the devil with them up to now, but we can’t get away with it all the time. Lal if anything should happen to me,  please be friendly with Flo, I think the world of her, she’s a good girl, it would be a terrific shock to her, because I’ve told her I am safe as houses, with nothing to worry about, so she wouldn’t worry, because we are getting married the first leave I get, and she’s so excited and looking forward to it. It will be a miracle if we get out of this, you wouldn’t know the “Laconia” now if you saw her, there’s know doubt La, one man to have created all this he wont survive anyway, well I’ll have to pack up now I have got a job to do, I will try and write more cheerful one next time, but I thought it best to let you know exactly how things are, here are a few cards for Roland, I suppose him and Derek get on quite well together now, I am dying to see them, If I am spared I will pay you a visit the first chance I get, so Bye Bye, Good Luck and God Bless you all.

XXXXX
P.S. Don’t let mother know too much, it would only upset her, it was a lovely letter she sent to me

The Cheshire Roll of Honour would like to thank Alan Gough for the picture and information on Harold.