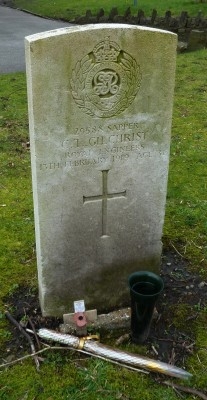 Charles Towel (or Towell) Gilchrist was born on 25 February and baptised on 19 March 1888 at St Andrew's Church, Grimsby, Lincolnshire, the son of Mary Charlotte and John Towel Gilchrist, a labourer of Back of 70 Garibaldi St, Grimsby. In April 1891, three-year-old Charles was living at Back of 74 Garibaldi St, Grimsby with his parents and one-year-old brother John (who died in June that year). By 1901 the family had moved to 66 Wintringham Rd, Grimsby.

It is not known why Charles came to Macclesfield - perhaps he had no choice if he wanted to progress in his career with the Post Office - but in the 1911 census he was described as a Post Office Civil Servant, boarding at Memorial House, Buxton Rd, Macclesfield, the home of widowed boarding house keeper Agnes Gardiner and her children Harold (23) and Maggie (21), along with another Post Office Civil Servant, John Pickard, who was from Sutton-in-Ashfield.

Another appointment, in November 1912, took Charles to Liverpool. However, it seems that he had fallen in love with his former landlady's daughter, Maggie Gardiner, and the couple were married at St Paul's Church, Macclesfield on 29 June 1914, setting up home in Liscard, near Wallasey.

In 1921, two years after Charles died, Maggie married Harold Quiggin at West Derby, Liverpool. The couple later lived in Butley, near Macclesfield, and in the late 1920s moved to Watford, Hertfordshire.

Charles volunteered for military service, no doubt joining the Royal Engineers because of his experience as a telegraph operator. He was drafted to France on 20 January 1915, and was recorded at 79 Buxton Road, Macclesfield in the 1918 Absent Voters' List.

Having survived the war, Sapper Gilchrist died on 13 February 1919 at his home at Liscard, Wallasey, Cheshire while on demob leave. His death and funeral were reported in the Macclesfield Advertiser on 21 February 1919:

SOLDIER VICTIMS OF PNEUMONIA - On Wednesday afternoon the remains of Private Charles T Gilchrist, of Memorial House, Buxton Road, Macclesfield were laid to rest in St Paul's Churchyard, Macclesfield, the Vicar (Rev F S Thetford) officiating. Deceased had served in the war four years. He was formerly a telegraphist in the W. R. E. and had settled down at Liscard after his marriage. The immediate cause of death was influenza, to which he succumbed on Thursday last week. The funeral was of a semi-military character, a volley being fired over the grave and the "Last Post" sounded.

Sapper Charles Gilchrist is buried in the north-east corner of the churchyard at St Paul's Church, Glegg St, Macclesfield, Cheshire, near the Glegg Street gateway. His grave was originally marked with a private memorial but this was removed at some time and in 1973 a Commonwealth War Graves Commission headstone was erected. He is also is commemorated on St Paul's Church war memorial.

The Commonwealth War Graves Commission holds casualty details for Sapper Charles Gilchrist, and he is listed on the Imperial War Museum’s Lives of the First World War website.

Elsewhere, Sapper Gilchrist is commemorated on the St James, Grimsby Roll of Honour, and on the Liverpool Post Office Staff war memorial.