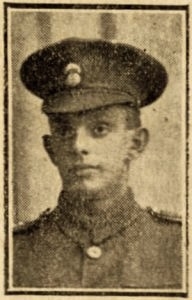 Harold Rydings was born in 1891 and baptised on 24 Jan 1892 at Hurdsfield Holy Trinity Church, Macclesfield, the eldest son of Amelia Ellen and George Booth Rydings, a grocer's assistant of 189 Hurdsfield Road, Macclesfield. In 1901, 9 year old Harold was living at 64 Mill Lane, Macclesfield, with his parents and younger brothers Leonard and Leslie. Harold and Leonard's ages are incorrect on this census.

By 1911 the family had moved to 59 Leeming Lane, Mansfield Woodhouse, where 19 year old Harold was living with his parents and younger brothers Leonard (17), Leslie (11) and Norman (5). Harold was employed as an engine cleaner for the Midland Railway Company.

Harold attested at Rotherham, Yorkshire, joining the Yorks and Lancs regiment with service number 13131, but later transferred to the 7th Royal Munster Fusiliers (RMF). During the First World War, the 7th RMF came under the orders of the 10th (Irish) Division.

The Royal Munster Fusiliers moved from Ireland to Basingstoke, England, in May 1915. On 9th July 1915 they mobilised for war and embarked from Liverpool for Mudros aboard the HMT Mauretania.

The battalion left Mudros aboard HMT Rowan on 6th August 1915, arriving at Suvla Bay at 5.30am the following day. Over the next two months they were involved in the attack on Chocolate Hill, The Battle of Scimitar Hill and attack on Hill 60.

It is not known when Harold was shot in the hand at Gallipoli, but he was evacuated from there to the Queen Alexandra Military Hospital at Cosham, Portsmouth, where he died of Enteric (Typhoid) Fever on 12th September 1915, aged 23 years.

Harold's death was reported in the Macclesfield Times of 17 September 1915:

Private H G Rydings, of Mansfield, who formerly resided in Macclesfield with his parents, has died at the Alexandra Hospital, Cosham, Hants, from wounds received in action in the Dardanelles, where he was serving with the 7th Battalion Royal Munster Fusiliers. Deceased, who was a nephew of Mr J T Brocklehurst, Chestergate, and has several relatives in the town, was born in Macclesfield twenty-three years ago. He was educated at the Mill Street Higher Grade Wesleyan School. His father was for many years manager of one of the branch shops of the Macclesfield Equitable Provident Society. Mr Rydings left the town some years ago to take up a similar position at Mansfield.

Private Rydings' younger brother, who is in training with the same regiment, is expecting to go out on active service any day.

In a letter to his mother, written from the hospital, the deceased gave a graphic account of the landing of his battalion in Gallipoli. With regard to the injury, he stated: I went under X-rays this morning, and it seems that all three of my fingers are broken. The bullet went straight through my wrist and second finger, at the knuckle, and took the top of my third. Describing the circumstances under which he was wounded, the deceased said: I was behind a bush, kneeling on one knee, letting bang, and I had fired about 60 rounds and was just reloading when, bang! my rifle was knocked out of my hand. I looked at my hand and found it bleeding, with a big hole through my fingers. I ran about 20 yards to where some of our fellows were, to have it bandaged up. A Corporal put a bandage on me and I asked for a drink of water, but no one had any. I moved from there because things were too hot. Another lad got in my place, and he had no sooner got there than he was shot through the head. I went to the Captain. He said, 'What, hit, Rydings?' and I said 'Yes, sir.' He replied 'well, you had better follow on in the rear.' as it was suicide to go back. I stayed with the company for an hour or more. Then the Captain saw how I was bleeding and he said I should risk it and go down to the beach as best I could. It was four miles to the beach, and how I got there alive God only knows.

Elsewhere, he is commemorated on the Mansfield St John's Church war memorial.

Brother of Leonard James Rydings, who served as Private 26630 with the Nottinghamshire and Derbyshire Regiment and later as Private 162229 with the Machine Gun Corps, and survived the war.