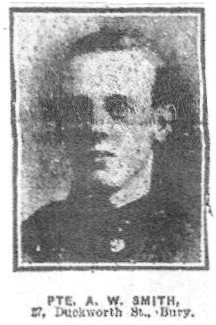 In 1901, five-year-old Alfred was living at 112 Woodbridge Rd, Ipswich, Suffolk, with his parents and siblings Gertrude May (8) and Lilian (2). By 1911 the family had moved to 26 Crossall St, Macclesfield and sixteen-year-old Alfred was living there with his parents and siblings Gertrude May (18), Lilian (12), John (7) and Albert Edward (5), having moved there from Bacup in Lancashire, where John and Albert were born. Young Alfred was employed as a boot finisher; one might say he was following in his father’s footsteps.

Alfred enlisted into the Lancashire Fusiliers at Bury in May 1916. He was twice invalided home suffering from trench foot and septic poisoning in his hands, and was drafted out for a third time in 1917.

The war diaries for the period of September 1917 show the Lancashire Fusiliers in the vicinity of Wilde Wood, and at midnight of the 5th, C and D Companies assembled in trenches ready for a 7.30 a.m. zero hour. At 7.15 a.m. the heavy bombardment commenced, with the attack on Borry Farm, starting 15 minutes later, under a creeping barrage. The 1/6th Lancashire Regiment was in support attacking Beck House and Iberian on the left, whilst the 61st Division attacked Hill 35. There was sharp fighting throughout the day, a heavy toll of casualties was caused by strong machine gun fire.

Alfred was killed during this action on 6th September 1917, aged 22 years. An obituary is included in research carried out by the Rev. Beryl Allerton, former Minister of Bury Unitarian Church; she does not say where the obituary came from:

It is officially reported that Pte Alfred Wm. Smith of the Lancashire Fusiliers, of 27 Duckworth Street, Bury has been killed in action. After joining the line battalion in May 1916, he was twice subsequently transferred to two battalions. He had been invalided home with trench feet, and also with septic poisoning in his hands, and it was on his third drafting out to France that he met his death on September 5th, On information being received between two and three weeks ago of his death the parents had some doubts and communicated with the War Office, who have replied that there is no doubt that Pte Smith was killed on the date mentioned. He was 22 years of age and before joining up was employed at Messrs. Parker's Greenbrook Slipper Works Chesham. The rolls of honour of Chesham Unitarians and St Saviour's Macclesfield, where he formerly resided bear his name. He was formerly in the bugle band of the Boy Scouts at St Saviour's.

It is not known which church in Macclesfield is meant by "St Saviour's."

Private Alfred Smith is buried in Grave Ref. XXVIII. D. 11 of the Tyne Cot Cemetery in Belgium. His father asked for the inscription GONE BUT NOT FORGOTTEN to be added to his headstone.

The Commonwealth War Graves Commission holds casualty details for Private Alfred Smith, and he is listed on the Imperial War Museum’s Lives of the First World War website.