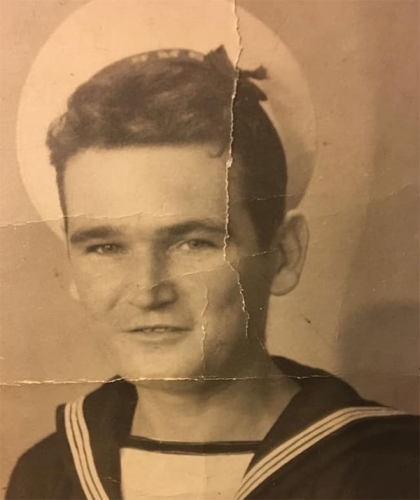 1st March 1942 H.M.S. Exeter was ambushed by the Japanese cruisers Haguro and Nachi escorted by four destroyers which were engaged in a running fight. H.M.S. Exeter's boiler room received a hit and the ship lost use of the director control for the main armament.
Smoke screen were laid by some destroyers but the Exeter received more hits, fires broke out and all electrical power supplies failed. The ship was abandoned after three hours in action, she was finally sunk by a torpedo.

54 of the ships company were killed during this action, 651 were rescued by Japanese ships and became POWs.
Peter was among the 651 rescued and spent three years as a POW.
In Spetember 1945 those who had survived captivity embarked on HM Depot ship Maidstone at Maccassar and arrived at Freemantle on September 30th for repatriation to the UK.
Peter passed away April 2001.

The Cheshire Roll of Honour would like to thank Diane Lindemann, Peter's daughter for the picture.