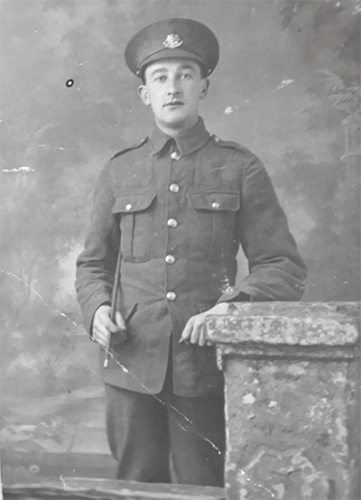 Born 20th March 1889 Samuel was the son of Samuel and Jane Jones of Yew Tree Farm, Saighton, Chester, where he lived with his two brothers and three sisters. The 1911 census shows that Samuel then 22 and working as a railway clerk, his eldest sibling was 40.

Samuel enlisted on the 9th September 1914, joining the 1/5th Cheshire Regiment. At the outbreak of the war the 1st and 2nd battalions of the Cheshire Regiment were regular battalions, the 3rd was a special reserve and 4th, 5th, 6th and 7th battalions were territorial, it quite possible that Samuel was in the territorials before the conflict began. Owing to the rush of recruits, second line units were formed and in Spetember 1914 a new 5th battalion was created.

On the 14th February 1915 after five months of training Samuel and the 1/5th battalion left Cambridge aboard three trains, and proceeded to Southampton, on arrival they were split into three parts and embarked on the S.S. Oxonian, Manchester Importer and the Glenarm Head. That evening the ships left the harbour where a much larger convoy was assembling. Part of the battalion crossed the channel during the night, arriving in Le Harve around 9am. The rest crossed during the following morning and arrived at 1:30pm.

Samuels name appears in the battalion’s mobilisation records it shows that he was attached to D Company. 17th February the battalion received orders to entrain, the following day they arrived in Bailleul. Later that afternoon they left Bailleul for Neuve Eglise. They stayed in the village until the 23rd March during this time they received instructions and training in trench warfare, the village was in range of German artillery, on February 25th the battalion had its first casualties, when four men were wounded by a shell landing in the village. On March 23rd the battalion went into the front line, taking over a section of trench from the Royal Irish Rifles.

Samuel would see action with the Cheshire’s through to 1st September 1916 during this period Samuel was wounded in the knee, he had kept notes his entry for July 20th 1915 states: In the trenches again for 6 days, I had a devil of a time. Got shelled nearly every day. Got hit in the knee with shrapnel and had three days at a dressing station, then back to trenches. Ernie Reynolds also got hit behind the ear and poor Prandle killed. He was buried near to the first dressing station. I was present at the burial service.

Owen Prandle was also from Chester and is named on the county roll.

Samuel sitting on box with two of his comrades.


Samuel would see out the rest of the war with the Army Service Corps and would be mentioned in Despatches he was finally demobbed 18th June 1919.

After the war he returned to Chester and went back to work as a railway clerk here he met Nellie (who was always known as Dorothy) in 1925 he married Nellie and the following summer they would have their only child also named Dorothy but she would be always known as Eileen.

Samuel lived in Chester all his life he died 28th June 1969, age 80, at Halkyn Road, Hoole, Chester. The picture below was taken around three years before he passed away.

The Cheshire Roll of Honour would like to thank Jan Ellison, Samuel's Grand Daughter for the pictures of Samuel and for the family information.