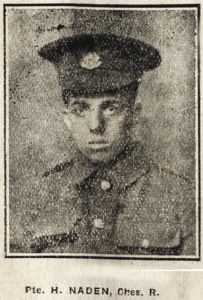 Harry Nadin was baptised on 5th May 1896 at Holy Trinity Church, Hurdsfield, Macclesfield, the son of Sarah and William Henry Nadin, a porter of Hurdsfield. In 1901, five year old Harry was living at 17 Wellington Street, Hurdsfield, with his parents and younger sister Florence (3); his father was then employed as a stationary engine driver at the nearby gasworks.

Harry was educated at Daybrook Street School, Hurdsfield, and was a regular attender at the United Methodist Fence Sunday School, Waterloo Street.

By 1911, the family had moved the short distance to 63 Fence Street and included two more children, William (9) and Gertrude (6); Harry was employed as an apprentice hairdresser. He later found employment with Mr Harry Royle, a dyer of Dale Street, Macclesfield.

Harry enlisted with the Cheshire Regiment in March 1915, undergoing training at Chester, Birkenhead and Bidstone, and was drafted to France to join the 2nd Cheshire Regiment on 2nd July. While in the trenches he had to be hospitalised on a number of occasions, suffering from stomach cramps.

The 2nd Cheshire Regiment participated in the battle of Loos, which was intended to result in the capture of the German positions from Loos to the La Bassee Canal. On the 3rd October, the Germans attacked all along the line of the 84th Brigade, but were repulsed except on the left where they gained a footing. A bayonet counter attack was met with a hail of bombs and driven back to the British front line. Harry died during this action on 3rd October 1915.

Private Nadin's death was reported in the Macclesfield Times on 29 October 1915:

Mr and Mrs Wm. Naden, 63 Fence Street, Macclesfield, have received a War Office notification stating that their son, Private Harry Naden, 2nd Cheshire Regt., was killed in action in France on October 3rd. News of his death was also contained in a letter from one of his comrades, who is a Macclesfield man. In his last letter home, Private Naden mentioned that he had been doing some sniping, and that Germans were being captured nearly every day.

Private Naden was 19 years of age and enlisted six months ago. He went out to France shortly after. In civil life, he was employed by Mr Harry Royle, dyer, of Dale Street, Macclesfield. He received his education at the Fence School, and was a regular attender at Waterloo Street United Methodist Church, his name being on the roll of honour.

An 'In Memoriam' notice was printed in the Macclesfield Times on 13 October 1916:

NADIN – In loving memory of Private Harry Nadin, 3rd Batt Cheshire Regt, who was killed in action at the battle of Loos, Oct 3rd 1915, aged 19 years.

Not dead to those who loved him,
Not lost, but gone before;
He lives with us in memory still
And will for evermore.
Sadly missed by Mother, Father, Sisters and Brothers.

Private Harry Nadin has no known grave and is commemorated on Panel Ref. 49 and 50 of the Loos Memorial at Pas-de-Calais, France. The Commonwealth War Graves Commission holds casualty details for Private Harry Nadin, and he is listed on the Imperial War Museum’s Lives of the First World War website.