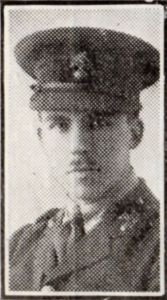 George Barber was born on 29 December 1888 and baptised on 20 February 1889 at Christ Church, Macclesfield, the son of Harriett and W. Henry Barber, a cashier of Crompton Road, Macclesfield.

In 1891, two-year-old George was living at 9 Longacre Street, Macclesfield with his parents and siblings Harriet (11), William Henry (10), Alice (8) and Ethel (7). By 1911, the family had moved to 75 Oxford Road and George and two sister, Alice and Ethel, were all working for the Borough or County Council as certificated assistant teachers.

George secured a teaching position at the Victoria Institute, Malaysia, in 1911 and was still there when war broke out, returning to England in January 1915 in order to enlist. He married Dora Wicker (or Wicken) in Kent in December 1915.

News of the death of 2nd Lieut Barber was reported in the Macclesfield Times on 13 October 1916:

… On Saturday night Mr Henry Barber, 65 Prestbury Road, Macclesfield, received the sad news of the death of his second son, Second-Lieut George Barber, Royal Fusiliers, who was killed in action in France on the 4th inst. Lieut Barber, who left a lucrative post abroad and travelled to England specially with the object of entering the service of his country, was a very promising young officer… the deceased was Mr Barber’s second son and he was 28 years of age. He was a scholar at Christ Church School, in which he afterwards served as a pupil teacher and assistant. Subsequently he was on the staff at St George’s School, Macclesfield, for about 18 months…. He pursued his studies for three years at the Saltley Training College, near Birmingham. Lieut Barber took an active interest in the Boy Scout movement in Macclesfield, and was formerly the assistant scoutmaster of the Christ Church troop. Five years ago he went out to Malay as a teacher and master of sports at the Victoria Institute, where the pupils are prepared for admission to the Oxford and Cambridge Universities. He there organised a troop of Boy Scouts, of which he was the scoutmaster, and at the time of his departure the roll of membership stood at 200. In addition, he was a member of the Malay Volunteers and a Lieutenant in the local fire brigade.

In January 1915, Lieut Barber came over to England for the purpose of enlisting in the Army, and the authorities of the Institute undertook to keep his position open in addition to supplementing his Army pay. Joining the Royal Fusiliers as a private, he trained at Epsom and Clipstone Park, and while stationed at the last-named camp received his commission as Second-Lieutenant, being gazetted to another battalion of the Royal Fusiliers. Twelve months later he went out the France and was invalided home last March suffering from frost-bite and double pneumonia. He was in three or four hospitals in France and England. Upon his recovery he rejoined his regiment at Shoreham, and six weeks ago was drafted out a second time… His father, on Monday morning, received the following communication… I am writing this lying in what is nothing more than a shell-hole. We are… in the thick of it. It is terrible: the stench is unbearable, and the sights are enough to turn the strongest man pale… we cannot dig, because [we would] be… digging up bodies. There are no dug-outs, no water, no trenches… Woods, roads and villages are wiped off the map… shells are falling like hail… you would laugh to see my new raincoat now… All we have to eat are biscuits, harder than dog biscuits, and bully beef… If I do not come through, you will know that I do not wish for anything better than to give my life for my country. Good-bye and God bless you all.

The deceased officer was only married last December to a London lady, who has lately been residing with her sister-in-law, Mrs A B Frith, at Upton. Lieut Barber had been connected with Christ Church and Sunday School all his life… Mr Barber’s eldest son, William Henry, is serving in the Royal Flying Corps.

A memorial service to Lieut Barber was held at Christ Church and a report was printed in the Macclesfield Times on 20 October 1916:

A service in memory of Second-Lieutenant George Barber, son of Mr and Mrs Henry Barber, 65 Prestbury Road, was held at Christ Church on Wednesday night... Every member of the Christ Church troop of Boy Scouts, of which Lieut. Barber was a former Scoutmaster, was present, under Scoutmaster J Start and Assistant Scoutmaster W. Chesworth... members of the family were in attendance: Mr and Mrs Henry Barber (father and mother); Mrs G Barber (widow); the Misses G and E Barber, Mr and Mrs J Wicken (London), Mr and Mrs E Barber, Mrs G Mellor (Liverpool), Mr A Mellor (Broken Cross), Miss E Barber (aunt), Mr and Mrs T Lawton, the Misses Barber (Beech Lane), and Miss Marsden (Stockport).... [George Barber] was baptised at Christ Church, was a member of the Day and Sunday Schools in his boyhood, was prepared for confirmation and made his first communion in Christ Church...

Yesterday morning Mrs Barber received the following letter from CSM Walker, Royal Fusiliers: "...the end was very sudden. He was killed by the explosion of a German shell in the front line and is buried at a small place called.... [censored] ...no officer had greater respect from a platoon under his charge..."

2nd Lieut George Barber is buried in Grave Ref. II. E. 4. of the Guards Cemetery, Lesboeufs, Somme, France. His father asked for the words "To live in hearts we leave behind is not to die" to be added to his gravestone.

Elsewhere, 2nd Lieut Barber is commemorated on a war memorial in the Cathedral Church of St Mary the Virgin, Kuala Lumpur, Malaysia.