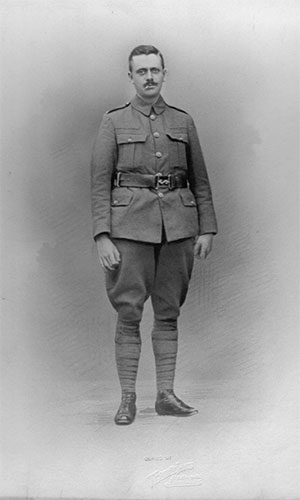 Edgar was born on 25th October 1880, the tenth of eleven children to William John and Mary Battersby (nee Oldham). He attended Stockport Grammar School and became a director of the family business in Offerton and in Conty, Somme, Northern France. He specialised in the dying processes and trained as an industrial chemist in Leverkusen, Germany. He was a fluent French and German speaker. His language skill meant he could have been commissioned into the Intelligence Services, but he felt it was fairer to join as a private and be promoted on merit.

As with many local middle-class men, Edgar played lacrosse as his sport of choice. He was still a playing member of the Offerton Club and had only recently relinquished his position as captain of the First Team. In his younger days he had played for Cheshire and was on the committee of both the County Association and the North of England Association. Before he was able to enlist, he is understood to have had an operation to correct varicose veins to ensure he was fully fit and he finally joined up in November 1915, going overseas on 26 November 1916. 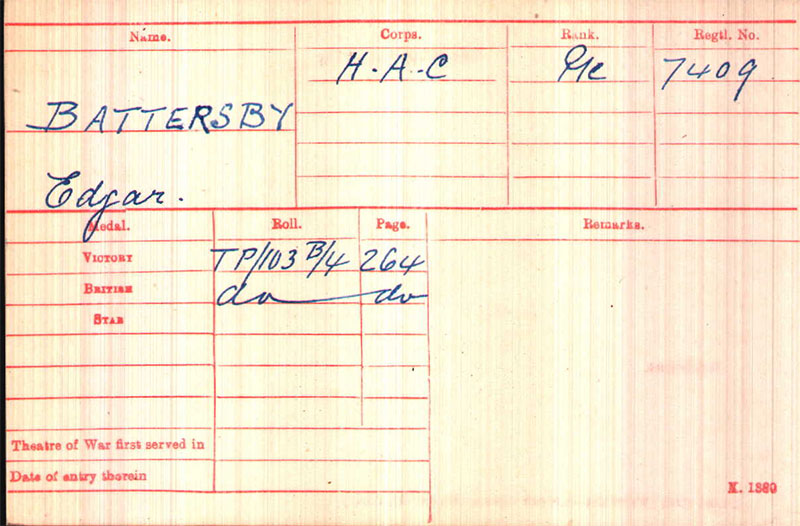 In spite of its name, the Honourable Artillery Company was primarily an infantry regiment - the oldest in the British Army - although it also had several artillery batteries.  The Battle of Arras had started on 9 April with a British attack from Vimy Ridge in the north to Bullecourt in the south. Nearly three weeks later, the fighting was continuing and the HAC and the other battalions of the 63rd Division were ordered to assault the German positions at Gavrelle. The attack was scheduled to take place on 28 April and would be delivered by two battalions of Royal Marine Light Infantry. Edgar and his comrades would be in reserve ready to support the marines. The main attack started at 4.25am and, by about 6.30, the HAC was ordered to move forward through the trench system to attack a German strongpoint which was pouring heavy fire onto the marines. They found they could not get close enough to engage the enemy and sent back for a supply of rifle grenades. It took until about 9am to capture the position by which time the 1st Battalion, Royal Marines, had been virtually wiped out. Within 90 minutes, the Germans had reorganised and counterattacked driving the British back to their original front line. The men of the HAC put up a determined defence and were able to fight off the Germans. They formed a defensive flank, holding the position for the remainder of the day. In comparison with the marines, they had been very fortunate, only 11 had been killed. The next day, Edgar and his comrades again attacked the German strongpoint. Again, in comparison with other units, the HAC would get off lightly (Edgar would be one of only six killed). Other attacking units suffered casualties from heavy German shellfire and became disorganised. Another German counterattack started to push back the British. At this point, one of the HAC officers, 2nd Lieutenant Pollard, dashed forward and with only four men, attacked the Germans with grenades, completely breaking up the attack and regaining all the lost ground. He was awarded the Victoria Cross of this action. Meanwhile, Edgar, who was acting as a stretcher bearer, was wounded by shrapnel along with another bearer. They both went to the first aid post just behind the front line and were treated there. That is the last that anyone heard of either of them.  Writing in the Stockport Express on 19 July, Edgar's friend, 2nd Lieutenant W Penley Fuidge, London Regiment said "He and I joined the HAC on the same day in April 1915 and from that time onwards a friendship spring up between us which will ever be in my memory. Being my senior in age, he seemed to have watched over me with a fatherly interest and was ever ready to show me kindness and consideration.... Mr Battersby, like myself, was qualifying for a commission and no doubt he would have attained that military promotion if the order for France had not interfered. I am certain of this; he would have made a splendid officer and kindly leader of men. To me, his death is an unspeakable loss, but his memory will ever be sacred and inspiring. From the first, I regarded him as a comrade of high moral worth and, in the future records of Stockport men "sacrificed in the field of battle”, none will be more deserved the gratitude and appreciation of his fellow citizens." 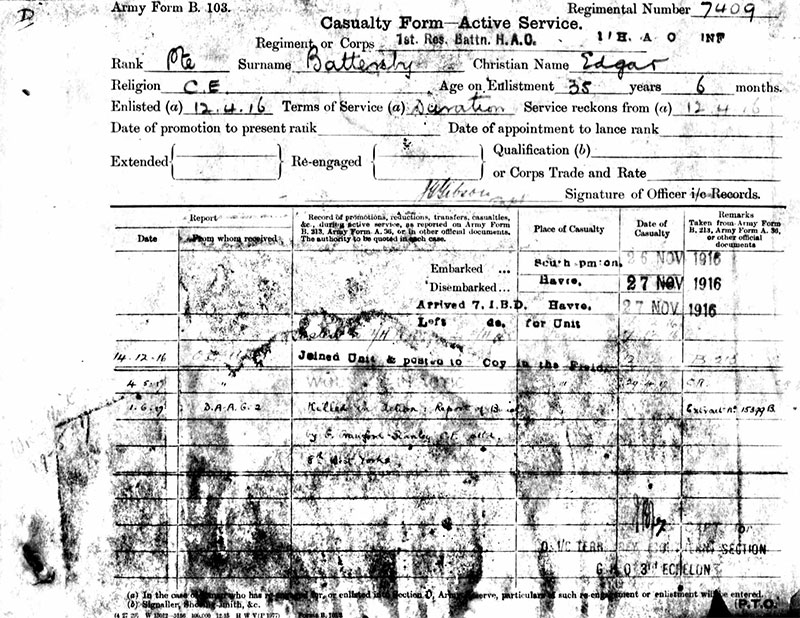 Official news had been received of the death in action on April 28th (1917) of Private Edgar Battersby, Infantry Section Honourable Artillery Company. The sad intelligence will occasion very great regret and sorrow in the large circle in which the deceased gentleman moved, and especially among his friends who respected him for his many estimable qualities and sterling character. He was in his 37th year and a bachelor and was the youngest son of the late Mr W.J. Battersby, J.P., of Strathclyde, Stockport, and a managing director of Battersby and Co, Ltd., Offerton Works, Stockport, Nicholl Square, London, and Conty (Somme), France. He was rejected when he attested, but he went through an operation to enable him to undergo the necessary training and enlisted as a private in the H.A.C. in September 1915. He went to France on the 26th November, 1916, and went through the arduous winter campaign there. His battalion has seen hard fighting since the commencement of the war, and only on Saturday last the papers announced that two men of the battalion had been granted V.C.’s for conspicuous bravery during the terrible fighting he went through.

We hear unofficially that he was acting as stretcher bearer as his company was leaving the trenches when a shell severely wounded him and the other stretcher bearer. The wounds were dressed at the first aid post, when all trace of Private Edgar Battersby was lost, and we can only presume he must have been hit by another shell. The sad news that he had made the great sacrifice was received from the War Office on June 12th, stating that he was killed in action in the field (previously reported wounded).

Private Battersby went through a course of training for dyeing in Germany and owing to the difficulties in the dyeing industry at the commencement of the war he had to continue the management of this department at the factory. This and the death of his father in February 1915, prevented him joining the army sooner than he did. He was one of those who can ill be spared and will be sadly missed.

Edgar Battersby, writes one who knew him, will be greatly missed on the lacrosse field and among his old lacrosse friends. He was one of six brothers who earned distinction at the game and played with Offerton. Edgar, like his brothers, began to handle a crosse in his early boyhood, and from the A team he soon gained promotion to the first team and became not only one of the stalwarts of the team, but during the last few sessions before the war was captain, and it was largely owing to his popularity and to his tact and energy that the players were kept together so well. He was not only a good player but took an important share in the administration of the game. For some time, he acted as secretary of the Offerton club; then he was on the committee of the Cheshire Lacrosse Association and was also a member of the executive of the North of England Lacrosse Association, and on all these bodies he acted with sound judgement and knowledge of the laws of the sport and showed on various occasions how keenly he had the good of the game at heart. As a player he was cool, resourceful, and very even tempered. He played at point or cover point, and whilst having nothing showy about him, it required a very good man to beat him, and even then, it did not occur often in a game. He was what may be described as a sound man who could always be relied upon, and who did not require to be brilliant to emphasise his good points as a player. On several occasions he played for Cheshire, and in the opinion of many who were well qualified to express an opinion there were few better defence men. He is another of that very gallant, and alas! numerous bands of lacrosse players who have given their lives for their country.


The Cheshire Roll of Honour would like to thank Rupert Battersby for the picture and supporting information on Edgar.