John was born in then parish of St Joseph's Church, Stockport and was the adopted son of Martin Kennedy, 14 Crowther Street, in the Lower Hillgate area. He worked as labourer for Stockport Corporation's Waterworks Committee until he enlisted into the army in December 1914.

The newly formed 6th Battalion sailed from Avonmouth on 16 June 1915, going into action as one of the re-enforcing Battalions, at Gallipoli, 7th July 1915. John's medal Index card shows that he arrived 1st August 1915. 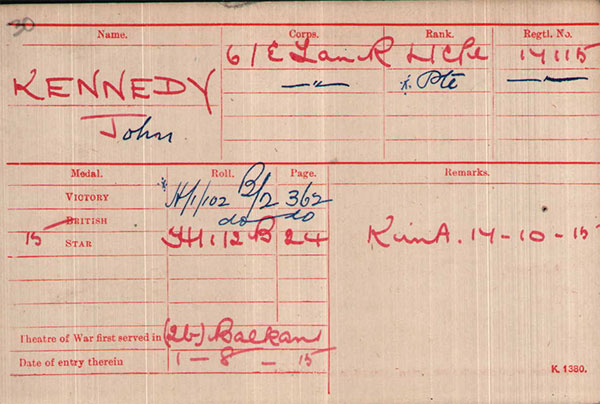 John will have taken part in three major battles during August before the failed campaign settled down for its final weeks before the Allied troops were evacuated. John's Company Sergeant Major wrote to his parents.

"Lance Corporal Kennedy was killed by a sniper whilst out digging on the night of October 7th. He had always proved himself to be a thorough good worker and one to be trusted. His comrades of the company tender their deepest sympathies to you."