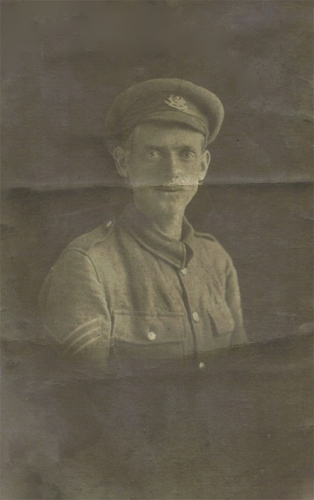 John is mentioned a number of times in the booklet "Stockport Lads Together" by David Kelsall. He enlisted around September/October 1914. Kelsall's book records "Amongst those joining up was forty-four-year-old Jack Harrison, the father of three children. The oldest was fourteen and a "half-timer" in a cotton mill. Jack was a printer at Dean's and Company, opposite Ellis Sykes on prince's Street. He embossed the gold lettering on hat bands but was often out of work”. It seems as though he quickly became an officer's batman. These duties, appropriate for an older man, would generally keep him away from the rigours of front-line duty. On 21 March 1918, the German army launched an overwhelming attack on a wide front. Within hours, front line trenches had been overrun and the British army was in full retreat. Many rear-guard actions were fought but the gains of the previous two years were all lost. The Cheshire’s had been reduced to three officers and 30 other ranks and had been merged into a "Composite Battalion" with men from other units. By 28 March, the Battalion was at Ignaucourt. They had been pushed back 50 kilometres over the previous few days. Kelsall describes a soldier telling his officer that, on 29 March Jack had been badly wounded in the forehead and had been rushed to a field ambulance in a wheelbarrow. He died the next day. And was buried in a schoolyard at Boves, near to the front line. Many such graves were destroyed by shellfire later in the war and this probably accounts for why he has no known grave. The following extract from the Battalion History provides an account of the period 28 - 29 March: “On March 28th, after they arrived at Ignaucourt, the Composite Battalion was ordered to counter-attack, and this was successfully accomplished, the enemy being driven off the top of the hill and held throughout the night. In this counterattack the French were operating on the right. During the night the British forces were withdrawn to allow the French to extend their line. On the morning of March 29th, the 118th Composite Battalion was ordered to take up a position near Aubercourt in a sunken road running towards Marcelcave, and they were to be ready to deliver a counterattack. The enemy advanced in large numbers, keeping in the cover of the woods as much as possible, and later on in the morning his troops were pouring through Ignaucourt. Our position," says the Diary, "was shelled intermittently throughout the day with shells up to 5.9 calibre, Our machine guns and 18-pounders were very active during the day, firing at the masses of the enemy moving about the hills opposite our position. The enemy did not attempt any attack during the day or night."