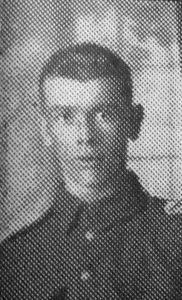 Walter Charles Woodhouse was born on 9 November and baptised on 20 December 1896 at Cromer Parish Church, the eldest son of Hannah Sophia and Walter William Woodhouse, a gas stoker of Cromer, Norfolk. In 1901, four year old Walter was living in Runton with his parents and siblings Violet (1) and baby George (2 months). Ten years later the family, living at Gas Works Cottages, Cromer, included four more children: Florence (8), John (7), Sarah (4) and Albert (1), and Walter was employed as a grocer's errand boy.

At some time between 1911 and 1915 the family moved to the Gasworks, Wilmslow, Cheshire, and later moved to Church Street, Wilmslow.

Walter joined the 7th Cheshire Regiment in Macclesfield in April 1915, and following a period of training in the south of England, the 7th Cheshires, as part of 159th Brigade, 53rd (Welsh) Division, received orders to equip for service in an undisclosed location in the Mediterranean. In July 1915 they sailed from Devonport to Alexandria in Egypt, then on to the island of Lemnos on the 4th August.

At 8am on 10th August the Battalion was ordered to attack Hill 70. This was unsuccessful and the Battalion suffered severe losses. A second unsuccesssful attack took place at 5pm.

The following day at 2.30pm the Brigade moved north, but the 7th Cheshires and 4th Welsh Regiments on the left were under attack so had to pull back. The 7th Cheshires remained in this position in trenches for several days.

It is not known when Walter became ill with Enteric (Typhoid) Fever; he was evacuated from Gallipoli and died on board hospital ship HMHS Grantully Castle on 1st October 1915, aged 18.

Private Walter Woodhouse would have been buried at sea and is commemorated on Panel Ref. 75-77 of the Helles Memorial in Gallipoli, Turkey. The Commonwealth War Graves Commission holds casualty details for Private Walter Woodhouse, and he is listed on the Imperial War Museum’s Lives of the First World War website.