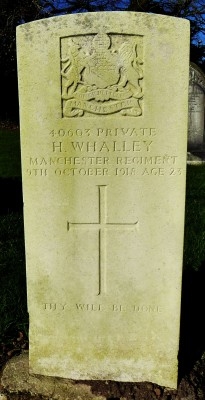 Harold Whalley was baptised on 25th February 1895 at St Paul's Church, Macclefield, the son and eldest child of Helena and Harry Whalley, a bootmaker of 10 Eastgate, Macclesfield. In 1901 six year old Harold was living at that address with his parents and siblings Tom (5), Harry (3) and baby Nellie, just six weeks old.

Harold was educated at St Paul's School, attaining standard grade VI, and on 21st September 1908 when employed as a card lacer he enrolled at Macclesfield Technical School to further his education.

In 1911 the family was at the same address and included another two children, Ethel (3) and Lily (ten months). By this time Harold was employed as a silk piecer, and he later worked for Messrs Mottershead as a twister. Harold attended St Peter's Church and was a member of St Peter's Sunday School, Institute, and football club.

Harold enlisted in Macclesfield with the 7th Cheshire regiment soon after the outbreak of the war, and was allocated service number 3435, but was later given service number 40603 on his transfer to the 21st Manchester Regiment, which in December 1915 came under orders of the 91st Brigade in the 7th Division. With the 21st Manchesters, Harold initially served in France from August 1916 until December 1917.

At Christmas 1916 Harold sent a card home to his family; on the reverse he wrote:

Dear Mother & all,
Just a few lines hoping to find you all in the best of health, as it leaves me at present. Well mother, I should like you to look after this card as it has been given to us by our Colonel. It has got all the names of the engagements what the Regt has been in. We are now in the trenches & shall not be able to write again for a while. All cheer up & hope for the best.
So I must now close, wishing you all a Merry & Happy Xmas.
I remain your loving son,
Harold xxxxxx

The 21st Manchester Regiment moved to Italy in December 1917, and in June 1918 Harold was awarded the Military Medal. The Macclesfield Times of 26 July 1918 carried this report:

Pte Harold Whalley, eldest son of Mrs Whalley, Widow, 10 Eastgate, Macclesfield, has been awarded the Military Medal for bravery on the field in Italy, where he is serving with the Manchester Regt. Writing to his mother he states: "I received the distinction for carrying messages on June 15th under heavy fire and gas shells. It was the day the Austrians started their offensive. Two of us in the battalion were rewarded - the transport sergeant and myself." Pte Whalley... was a member of St Peter's Sunday School, Institute, and football club. He joined up on the outbreak of war in the Cheshires, being subsequently transferred to the Manchesters, and served in France 16 months before being drafted to Italy last Christmas. In civil life he was a silk twister. Two brothers are with the Cheshires - Pte Tom in Egypt, and Pte Harry in France.

In September 1918 the 21st Manchester Regiment returned to France, where they came under the orders of the 7th Brigade in the 25th Division. It is not known when or where Harold was wounded, but, since the 21st Manchester Regiment's war diary reports no casualties for September 1918, it is reasonable to assume he was injured in early October, as he was transported to hospital in London before 9th October, when he died. The war diary for October 1918 includes the following entries:

After being wounded, possibly during the attack on Ponchaux Geneve & Beaurevoir on 5th October, Harold was repatriated to England and treated at the 1st London General Hospital (St Gabriel's College, Cormont Road, Camberwell), where he died of his wounds on 9th October 1918.

Harold’s death was reported in the Births, Marriages and Deaths section of the Macclesfield Courier on 19th October 1918:

Harold’s death was also reported in the Macclesfield Times on 18th October 1918:

Private Harold Whalley, Manchester Regiment, son of Mrs Whalley, 10 Eastgate, Macclesfield, died on October 9th from wounds sustained in France. Private Whalley enlisted shortly after the outbreak of war and served in France for 16 months. He was then transferred to Italy, where he was stationed for nine months. On June 15th he was awarded the Military Medal for carrying messages under heavy shell fire. He was re-transferred to France about five weeks ago. Twenty-three years of age, he was educated at St Paul's School and attended St Peter's Church. He was a member of St Peter's football team. Prior to enlistment he was employed by Messrs Mottershead as a twister. Two brothers are serving, one being in Egypt. The funeral took place at the Macclesfield Cemetery on Tuesday with military honours.

After Harold's death, a photograph was taken of his ten-year-old sister Ethel, wearing a black armband. She is wearing a large watch on her left wrist, and it seems likely that this was Harold's watch.

Private Harold Whalley is buried in grave ref. Z 18259 in Macclesfield Cemetery. His mother asked for a cross and the words “THY WILL BE DONE” to be added to his headstone.