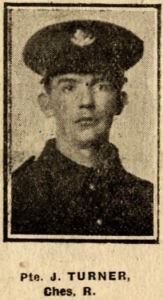 John Turner was born in October 1893 at Goldenhill, Staffordshire, the eldest son of Rosannah (Rose Hannah) and John Turner, a coal carter of Goldenhill. In 1901, 7 year old John was living at 52 Limehouses, near Goldenhill, with his parents and siblings Jane (10) and Rachel (3). The family moved house the following year and another son, Joseph, was born in Gawsworth.

By 1907 the family had moved to 14 Albion St, Sutton, Macclesfield; John was employed as an embroiderer at Albion Street Mills and had enrolled at Macclesfield Technical School to further his education. He had previously attended St George's Branch School, London Road, where he attained standard grade VII.

In 1911 Rose Hannah Turner, who was then a widow, was living with her family at 44 South Street, Macclesfield. At that time John was working as an embroiderer at the Albion Mills, Sutton, but when he enlisted three years later he was employed at Talk-o'-th'-Hill Colliery, Staffordshire.

John enlisted at Macclesfield in September 1914, joining the 9th Cheshire regiment, which came under orders of 58th Brigade, 19th (Western) Division. The Regiment moved to Salisbury Plain for training and by December 1914 was in billets in Basingstoke, returning to Salisbury Plain in March 1915. On 19 July 1915 the regiment left Folkestone for France, landing at Boulogne.

It is not known when John was injured but he died of his wounds at No. 7 Casualty Clearing Station at Merville in France on 19 September 1915, aged 21 years. His death was reported in the Macclesfield Times on 8 October 1915:

PRIVATE TURNER - On Friday Mrs Turner, 8 Albion Street, Macclesfield, received news that her son, Private John Turner, 9th Cheshire Regt, died of wounds at the Clearing Station, Merville, France, on September 19th. Private Turner enlisted about 12 months ago and went to France in July. He had written several letters to his mother and the last heard of him was about a month ago, when Mrs Turner had a field postcard stating that he was quite well. Private Turner was 22 years of age and before joining the Army was working as a collier at Talk-o'-th'-Hill, Staffordshire, and prior to that he was employed by Councillor A W Hewetson at the Albion Mill, London Road, Macclesfield.

In Macclesfield, Private John Turner is commemorated on the Park Green, Town Hall and St Michael's Church war memorials, and on the Brunswick Wesleyan Church Roll of Honour.