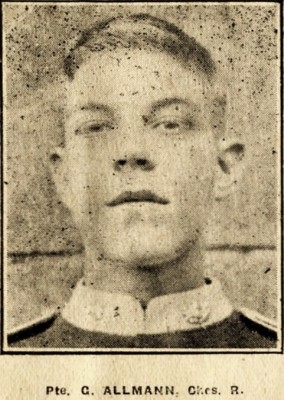 George Allman was born on 6th January 1895 in Macclesfield and baptised at St Michael's Church on 7th June, the son of Anna and James Allman, a farm labourer.

In 1901, the family was mistakenly recorded in the census with the surname 'Ormond', and six-year-old George was living at 46 Stanley St, Macclesfield with his parents and older brothers William (21), Walter (17) and Frank (9).

Anna Allman died in 1907 and in 1911 George was living with his widowed father and brother Walter at a boarding house at 38/40 Derby Street, Macclesfield. George was then employed as a cotton weaver at Lower Heyes Mill.

George attested at Chester and was drafted with the British Expeditionary Force to France on 18th December 1914. The 1st Battalion were now on the Ypres Salient; and the battle for Ypres was a period of continuous shelling, readjustment of the front line which caused many casualties. It was the beginning of trench warfare without any of the amenities which were afterwards introduced.
George died of wounds in Flanders on 10th February 1915, aged 20 years. His death was reported in the Macclesfield Times on 5 March 1915:

News has been received by his brother that Private George Allman, of 7 Bank Place, Bank Street, was killed in action in the North of France on February 10th.

Private Allman was well-known in the town and just before the war broke out was employed at the Lower Heyes Cotton Mill. He was formerly in the Special Reserve of the Cheshire Regiment and, as trade was slack at the Lower Heyes mill, at the time of the last encampment he joined the Regulars. He went out to the front on 18th December, and on the 26th his brother received a letter from him stating that he was in the firing line. He further stated, "We go into the trenches for 48 hours, and then we are relieved for 48 hours. We enjoy watching the Germans let go at our aeroplanes, all for nothing - just a mere waste of ammunition.

Another letter was received dated 15th January, in which Private Allman said, "We are having it very rough out here: up to the knees in water and mud in the trenches. There are more with bad feet than anything else."

On the 10th February Private Allman was wounded in the head and died in hospital the following morning. An undated letter addressed to his brother in Macclesfield was found in his pocket, and Quartermaster-Sergeant Noble, of Langley, forwarded it, accompanied by the following:

"I regret to say that your brother George died of wounds this morning (February 11th) at 6 o'clock. He has been buried in Dranoutre churchyard, a small village in the North of France. I was present at his funeral, and I am going to take steps to have his grave marked with a substantial wooden cross."

Private George Allman is buried in grave ref. II. A. 15. in Dranouter Churchyard in Belgium. The Commonwealth War Graves Commission holds casualty details for Private George Allman, and he is listed on the Imperial War Museum's Lives of the First World War website.

In Macclesfield, Private George Allman is commemorated on the Park Green, Town Hall and St Michael's Church war memorials.
The floral tributes laid when the Macclesfield Park Green War Memorial was unveiled on 21st September 1921 included one with the words "In fond remembrance of George, Frank, and Fred Allman, from father, brother and family."