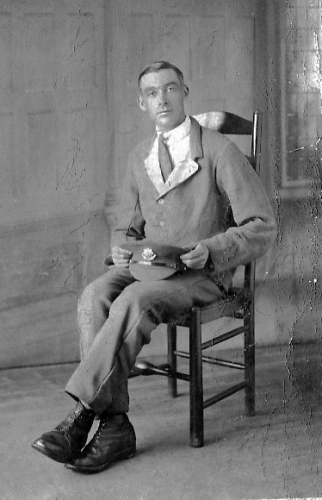 George was the eldest son of Mr and Mrs James Davies of 8 Dobells Lane. Leftwich Green, Northwich, prior to enlistment he worked at James Littler and Sons timber merchants in Northwich. James enlisted in the Cheshire Regiment in January 1915, he was sent to Salonika in November 1915, sometime later he was invalided home suffering from dysentery, on recovery he was sent back to Salonika and once more contracted dysentery. He convalesced from March 1918 to July 1918 and was then sent to France.

He was transferred to the Royal Inniskilling Fusiliers in October 1918, the fighting in which George was killed was the last action the 6th battalion took part in, that evening the battalion returned to billets and three days later the war ended.

His commanding officer wrote to his mother:

The war office will inform you officially, that Pte. Davies was killed in action on Nov 8. I write informally as his company commander to offer to you our sympathy and that of his other pals in the company. His death was instantaneous, the result of machine gun fire. Though we were strangers and the company new to him, he was a credit to it and his loss is felt by us all. he only joined us a very short time ago, but soon made many friends in the company who miss him.

Your son Pte. G Davies was killed in action in the last fight in which we were engaged. He was buried with the other dead of the brigade in the cemetery at Dourlers. The parish priest conducted the funeral service. The mayor has also spoke most feelingly after the liberation of the township and of the noble sacrifice made by the British.