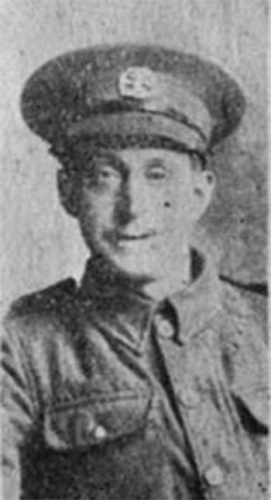 Alfred Ridgway was born in Macclesfield in 1886, the son of Harriet and George Ridgway, a fustian cutter of 134 Crompton Road, Macclesfield. In 1891, four-year-old Alfred was living at that address with his parents and siblings George (9), Arthur (7) and Frederick (1).

Ten years later in 1901, the family had moved to 8 Crown Street West and Alfred had another brother, Harry, born in 1892. By this time Alfred had left school and was working as a bill poster.

On 2 January 1905 Alfred married Jessie Bevan at St John's Church, Macclesfield. In 1911 the couple were living at 14 Henry Street, Macclesfield; Alfred was employed as a brewery carter and they had three daughters: Winifred (5), Florence Vera (3) and Phyllis Maud (8 months). A son, Alfred, was born in 1913.

Alfred enlisted in Macclesfield in May 1916, first serving with the South Lancashire Regiment with service number 28531; he was later transferred to the Manchester Regiment.

Private Ridgway's death was reported in the Macclesfield Times on 29 June 1917:

A BURSTING SHELL: MACCLESFIELD YOUNG MAN KILLED - Private Alfred Ridgway, Manchester Regt., whose wife and four young children reside at 14 Henry Street, off Old Park Lane, has been killed in action in France... by a bursting shell which wounded two of his comrades. He was 31 years of age and the son of Mr and Mrs George Ridgway, 5 Anderson Street, off Chester Road. A native of Macclesfield, the deceased soldier received his education at the Crompton Road Day School, being also an attendant at the Sunday School. He was formerly employed at the Crown brewery, Bond Street, and enlisted twelve months ago last May, being drafted out to France the following October. The eldest child is eleven years of age.

The late Private Ridgway has three brothers serving in the Army, namely: Private Frederick, Cheshire Regt (who was wounded at the battle of Gaza on March 26th); Private Harry, South Lancs Regt (serving in France, where he was wounded some time back); and Private George (in France with the Dragoon Guards).

Private Alfred Ridgway is buried in Grave Ref. IV. D. 13 of the Cement House Cemetery in Belgium. The Commonwealth War Graves Commission holds casualty details for Private Alfred Ridgway, and he is listed on the Imperial War Museum’s Lives of the First World War website.