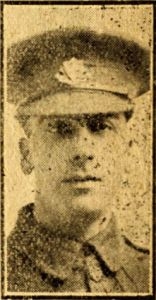 Joseph Butterworth was born in Macclesfield in 1887, the son of Annie and John Butterworth, a licensed victualler. In 1891, three-year-old Joseph was living at the Wheatsheaf Inn, 10 Stanley Street, Macclesfield with his parents and siblings John Thomas (17), Arthur (15), Alice (13), Frederick (12), Frances (9), Annie (5) and Ethel (1). Stanley Street at that time was home to several more public houses: the Cheshire Cheese was at number 8,  the Stanley Arms at number 11, the Crown & Anchor at number 12, the Moulders Arms at number 14, the Golden Eagle at number 19 and the Lamb Inn at number 33.

By 1901 the family, including another brother, nine-year-old Percy, had moved to 152 Crompton Road. Joseph's parents and four older siblings were all employed as silk weavers, while Joseph was a box packer.

On 29 September 1907 Joseph, then living at 62 Chestergate, married Lily Houghton of 76 King Edward St at the Trinity Wesleyan Methodist Church in Cumberland Street, Macclesfield. By 1911 the couple were living at 24 Hope Street West, Macclesfield and had two children, Edith and Jack.

Joseph enlisted in the Cheshire Regiment in November 1914, and after training was drafted to France on 19 July the following year. In 1916 he was wounded in the right knee and was treated at a hospital at Rouen.

The death of Private Butterworth was reported in the Macclesfield Times on 22 September 1916:

FATAL BOMB ACCIDENT – LOCAL SOLDIER’S FATE IN THE TRENCHES
… Private J Butterworth, Cheshire Regt, of King Edward St, Macclesfield, was killed in France on 1st inst. Mrs Butterworth received the following letter… “Jack was in very good spirits and was cleaning his rifle to get everything ready for action when a boy with us accidentally pulled the detonator out of a bomb, which immediately exploded, killing Jack and wounding some of his comrades…”

Private Butterworth, who was 30 years of age, was the son of Mr John Butterworth, 154 Crompton Road, and his father was formerly the caretaker of the Macclesfield Liberal Club. The deceased was educated at Crompton Road School and as a boy was in the choir at the Old Church. He had been employed at Alderman P Davenport’s Mill for the past sixteen years.

Private Butterworth enlisted in the Cheshire Regiment in November 1914 and was drafted out to France the following July. A few months ago he was wounded in the right knee and spent some time in the hospital at Rouen, but did not return to England. The deceased leaves a wife and four children.

The floral tributes laid when the Macclesfield Park Green War Memorial was unveiled on 21 September 1921 included one with the words “In remembrance of our dear father, Private J. Butterworth, from Edith, Jack, and Lilian.“