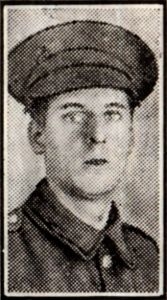 Albert Pedley was born in Hurdsfield on 10 November 1887 and baptised at St Michael's Church, Macclesfield on 26 April 1888, the son of Mary and Frederick James Pedley, a silk weaver of Macclesfield.

Before the war, Albert had served with the local militia (4th Cheshire Regiment), and on 2 September 1914 he enlisted at Macclesfield to serve for three years with the Cheshire Regiment. Private Pedley was appointed Lance Corporal on 3 September 1915, just before being drafted to France on 6 September 1915. His unit crossed France and departed from Marseilles on 28 October 1915, bound for Salonika.

Albert was promoted to Corporal on 26 June 1916. He was admitted to hospital on 8 September 1916 and two days later was transferred to the 42nd General Hospital in Salonika, where he died of dysentery on 26 September 1916.

The death of Corporal Pedley was reported in the Macclesfield Times on 20 October 1916:

The late Corporal Pedley was born in Macclesfield 26 years ago, and was educated at Lord Street Day School... He enlisted shortly after the outbreak of war, being at the time employed at Messrs Lonsdale and Adshead's Brewery. He was first drafted out to France, where he remained four months, and then was sent to Salonika. His brother, F J Pedley, completed twelve years' service with the colours last March, having been out to France. A brother-in-law, Private Samuel Batty, is in training with the Cheshires.