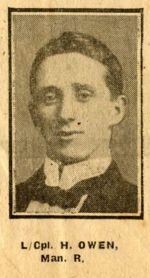 Harold Owen was born in 1888 and baptised on 12th September that year at Christ Church, Macclesfield, the son of Rebecca and William Owen, a silk weaver of 3 Bond Street, Macclesfield.

In 1891 three year old Harold was living at the same address with his parents and older siblings Sarah (18), Arthur (13), Emily (10) and William (7). Harold’s parents both died in 1891 and his sister Sarah looked after her younger siblings: in 1901 the family was just round the corner at 42 Shaw Street with Sarah named as head of the household, living with Emily, Harold, and their 78 year old grandmother Hannah Brown.

Ten years later in 1911, Sarah, Emily and Harold were still sharing a home at 37 Shaw Street, and Harold was working as a lithographic printer.

Soon after the outbreak of war, Harold attested at Manchester, and joined the 8th Battalion of the Manchester Regiment which was initially stationed at Ardwick, but moved to Rochdale at the end of August 1914. The Battalion was mobilised for war on 10th September and embarked from Southampton for Alexandria, arriving there on 25th September 1914.

The movements of the 8th Manchester Regiment between 5th August 1914 and 4th June 1915 can be read in this transcription of a diary written by Private Joseph McLean.

The Battalion landed at Gallipoli on 6th May 1915. On 7th August the Battalion was ordered to attack and occupy the Turkish trenches, working in conjunction with the 6th Manchesters as both had been weakened by the loss of many men. This operation, the Battle of Krithia Vineyard, was an unsuccessful attempt to divert Turk attention from a large British landing, and Harold was one of the men killed during this action.

Lance Corporal Harold Owen has no known grave and is commemorated on Panel Ref. 158 to 170 on the Helles Memorial in Turkey. The Commonwealth War Graves Commission holds casualty details for L/Cpl Harold Owen, and he is listed on the Imperial War Museum’s Lives of the First World War website.