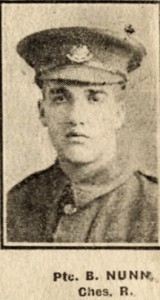 Bertie joined the 7th Cheshire Regiment in Macclesfield in September 1914, and following a period of training in various locations in the south of England, the 7th Cheshires, as part of 159th Brigade, 53rd (Welsh) Division, received orders to equip for service in an undisclosed location in the Mediterranean. In July 1915 they sailed from Devonport to Alexandria in Egypt, then on to the island of Lemnos on the 4th August.

At 8am on 10th August the Battalion was ordered to attack Hill 70. This was unsuccessful and the Battalion suffered severe losses. A second unsuccesssful attack took place at 5pm.

The following day at 2.30pm the Brigade moved north, but the 7th Cheshires and 4th Welsh Regiments on the left were under attack so had to pull back. The 7th Cheshires remained in this position in trenches for several days.

On 8th September Bertie was badly wounded by a shrapnel wound in the back; he was evacuated from Gallipoli and died on board hospital ship HMHS Nevasa the following day, 9th September 1915, aged 23.

Bertie's death was reported in the Macclesfield Times on 24th September 1915:

Official information has reached Mr and Mrs Leonard Nunn, 77 Coare Street, Macclesfield, that their son, Private Bert Nunn, 1/7th Battalion Cheshire regiment, died on September 9th from wounds sustained while fighting in the Dardanelles. News of his wounds was conveyed to private Nunn's parents by Private Justin, of the same regiment, who stated that the deceased was hit in the back on September 8th.

Private Nunn was born in March, Cambridgeshire, and was 23 years of age. He enlisted about 12 months ago and in civil life was employed at Mrs Leech's Dyeworks. Educated at Beech Lane School, he attended St Peter's Church and was a member of the reading-room. His brother, Harry, is with the 2/7th Batt. Cheshire regiment at Bedford.

A brother-in-law of the deceased, Private Hugh Bracegirdle, 1/7th Battalion Cheshire Regiment, was wounded at the Dardanelles in the left hand on August 10th and is now in hospital at Mudros, Lemnos.

Private Bertie Nunn has no known grave and is commemorated on panel ref. 75 to 77 of the Helles Memorial, Turkey. The Commonwealth War Graves Commission holds casualty details for Private Bertie Nunn, and he is listed on the Imperial War Museum’s Lives of the First World War website.