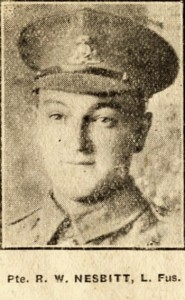 Robert William Nesbitt was born in Bramley near Leeds in 1896, the son of Elizabeth Ann and John Nesbitt, a railway loco foreman. In 1901 four-year-old Robert was living at 22 Middle Cross St, Armley, Leeds with his parents and brothers John (8), Frank (7), Ralph (3) and Maurice (2).

By 1911 Robert's father had died and the family had moved to 68 Crossall St, Macclesfield, where Robert's mother ran a grocery and provision business with her sister, Mary Jane Cooper. Robert was then employed as a junior clerk at the Macclesfield Corporation. However, prior to enlistment, he was employed as a wire drawer at Messrs Glover's cable works, Old Trafford, Manchester.

Robert enlisted in Manchester in April 1917, joining the 1/5th Battalion (T.F.) Lancashire Fusiliers as Private 30992. He was drafted to the Ypres Salient in July 1917 where he was killed in action on 6th September 1917, aged 20 years.

Robert Nesbitt's death was reported in the Macclesfield Times on 28 September 1917:

Mrs E A Nesbitt, Crossall St, Macclesfield, received official notification on Sunday morning of the death in action... on September 6th of her son, Pte Robert William Nesbitt, Lancashire Fusiliers... Pte Nesbitt was twenty-one years of age and a native of Yorkshire. He came to Macclesfield when eight years old and received his education at Christ Church day school, being also connected with the church. In civil life he was employed at Messrs Glover's cable works, Manchester. Pte Nesbitt only joined the colours four months ago, and trained at Barry, South Wales. He fired his course at Cardiff and was drafted out to France six or seven weeks ago. Pte Nesbitt had written home to say he was in the firing line, and his last letter was received just over a fortnight ago.

Two brothers are serving in the Royal Navy. The first, Signalman Frank Nesbitt, is stationed at a naval depot, and the second, Ordinary Seaman Ralph Cooper Nesbitt, has seen service afloat. He returned on Wednesday to his ship after a three weeks' leave in Macclesfield. Another brother died on home service some months ago and the remaining one is engaged upon work of national importance.

Private Robert Nesbitt has no known grave and is commemorated on Panel Ref. 54 to 60 of the Tyne Cot Memorial in Belgium. The Commonwealth War Graves Commission holds casualty details for Private Robert Nesbitt, and he is listed on the Imperial War Museum’s Lives of the First World War website.

Brother of Frank and Ralph Cooper Nesbitt, who both served with the Royal Navy and survived the war; Maurice Nesbitt, who served as Private 316778, 23rd Battalion, Royal Welsh Fusiliers and died whilst in training at Mundesley, Norfolk in April 1917; and John Moxon Nesbitt, who was a conscientious objector and undertook farm work during the war.