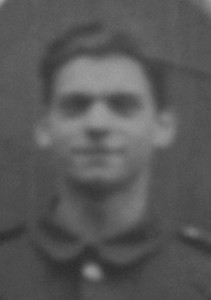 Fred attested with the 7th Bn Cheshire Regiment on 7 November 1914 at the age of 17 and was allocated service number 2651, initially serving with the Reserves because of his youth. He stated that he lived at 4 Barber Street, Macclesfield and his next-of-kin was his father, who lived at 40 Windmill Street, Macclesfield.

He was posted to France on 30 August 1916, sailing from Southampton, and was transferred on 10 September 1916 to the 1st Battalion of the Cheshire Regiment with service number 49366. Private Jones was promoted to Lance-Corporal on 26 May 1917 and to Acting Corporal on 8 September 1917.

Corporal Jones was wounded in the thighs and right arm on 5 October 1917 and died of his wounds at No 41 Casualty Clearing Station the next day.

Corporal Fred Jones is buried in grave ref. I. L. 47. of the Godewaersvelde British Cemetery, Nord, France. The Commonwealth War Graves Commission holds casualty details for Corporal Fred Jones, and he is listed on the Imperial War Museum’s Lives of the First World War website.

The floral tributes laid when the Macclesfield Park Green War Memorial was unveiled on 21 September 1921 included one with the words “Fred Jones. Ever remembered.”