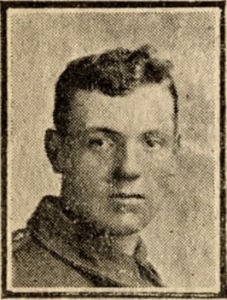 Clarence Hickson was born on 4th January and baptised on 2nd February 1896 at St Michael's Church, Macclesfield, the son of Hannah Elizabeth and Charles Arthur Hickson, a grocer of 85 Park Lane, Macclesfield. In 1901, five year old Clarence was living at that address with his parents and siblings Margaretta (10), Florence (3) and Rowland (2).

The following year, on 3rd November 1902, Clarence was admitted to St George's School, attending full time until he left the school on 1st February 1909.

Clarence's father died in 1906, and by 1911 the family had moved to 69 Union Street; Clarence was employed as a boot repairer by Mr Kordian of Mill Street. His mother died two years later in 1913.

Clarence was a regular attender at Park Street Methodist Chapel and sometimes taught at Lord Street Sunday School. He was on the committee for the Lord Street Band of Hope Union.

Clarence enlisted with the 2nd Cheshire Regiment on 26th April 1915 and was drafted to France four months later, on 11th August.

The 2nd Cheshire Regiment participated in the battle of Loos, which was intended to result in the capture of the German positions from Loos to the La Bassee Canal. On the 3rd October, the Germans attacked all along the line of the 84th Brigade, but were repulsed except on the left where they gained a footing. A bayonet counter attack was met with a hail of bombs and driven back to the British front line. Clarence died during this action on 3rd October 1915, and his death was reported in the Macclesfield Times on 5 November 1915:

SUNDAY SCHOOL WORKER: PTE HICKSON KILLED IN ACTION - Another Macclesfield soldier to give his life for King and Country is Private Clarence Hickson (19), and, prior to enlisting, lived with his brother and sisters at 69 Union Street. Official news was received on Sunday that he was killed in action on October 3rd. Private Hickson joined the 2nd Cheshire Regt after the outbreak of war and went out to France on August 11th. His death will be regretted by the members of Lord Street Sunday School, where he was an active worker, and on the Committee of the Band of Hope. He worshipped at Park Street Chapel. Private Hickson was educated at St George's School.

Private Clarence Hickson has no known grave and is commemorated on Panel Ref. 49 and 50 of the Loos Memorial at Pas-de-Calais, France. The Commonwealth War Graves Commission holds casualty details for Private Clarence Hickson, and he is listed on the Imperial War Museum’s Lives of the First World War website.