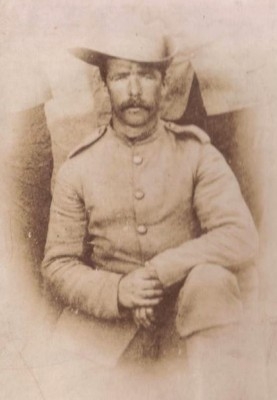 William Griffin was born on 12th January and baptised on 21st January 1872 at St Alban's Church, Macclesfield, the son of Bridget (née Broderick) and John Griffin/Griffith, a labourer of Buke Street, Macclesfield, both from Galway, Ireland.

On 13th January 1880, William was admitted to the Macclesfield workhouse. It is not known when he left the workhouse, or whether any other family members were also admitted, but in 1881 he was living at "St George's Industrial School for Roman Catholic Boys" at 137a West Derby Road, Liverpool.

Just after the start of the 2nd Boer War, on 12th February 1900, William joined the 4th Cheshire Regiment (Militia/Territorial Force) in Macclesfield, receiving service number 4434. He stated that he lived at 1 House 3 Court, Wood St, Macclesfield, he worked in Macclesfield as a labourer for Mr Rathbourne, and that he had previously served with the 4th Cheshire Regiment and was re-enlisting. He was described as being 5ft 4in tall, weighed 127 pounds and had a 32 inch chest. He had a fresh complexion, brown hair, grey eyes and was a Catholic. William was 'disembodied' (returned from the regular army to the Territorials) on 10th May 1902, after the end of the 2nd Boer War, and finally discharged from the Army in 1904.

By 1911, William was back in Macclesfield, living at 51 Waterside with his mother and older brothers John and James. He filled out the census form for his mother and signed it himself, but gave his age as only 36 instead of 39. William was then employed as a bricksetter's labourer, working for a house builder. He later found employment as a house painter in Manchester, where he was working in August 1914 when war broke out.

After the outbreak of war, William enlisted with the 2nd Battalion of the Cheshire Regiment, which came under orders of 84th Brigade, 28th Division. William was sent to Birkenhead for training, and was drafted to France on 6th March 1915. He was wounded at some time during the summer of 1915, but after spending time in hospital he returned to his regiment.

The 2nd Cheshire Regiment participated in the battle of Loos, which took place between 25th September and 13th October 1915 and was intended to result in the capture of the German positions from Loos to the La Bassee Canal. On the 3rd October, the Germans attacked all along the line of the 84th Brigade, but were repulsed except on the left where they gained a footing. A bayonet counter attack was met with a hail of bombs and resulted in being driven back to the British front line. William died during this action on 3rd October 1915.

William's death was reported in the Macclesfield Courier of 5th February 1916 (the family name was misprinted as Griffen in the news report):

Official information from the Record Office at Shrewsbury was received by Mrs Griffen, of 51 Waterside, Macclesfield, last Thursday week, stating that her son, Private Wm Griffen, had been killed in action at the Battle of Loos on October 3rd... He was 42 years of age and had gone through the Boer War in South Africa. Upon the outbreak of the present war he was employed as a painter at Manchester, but he enlisted in the 2nd Battalion Cheshire Regiment, and after undergoing a course of training at Birkenhead he went to France... and has been in the trenches ever since. He was, however, wounded about the middle of last year, and after being in hospital he returned to the front...

Private William Griffin has no known grave and is commemorated on Panel Ref. 49 and 50 of the Loos Memorial at Pas-de-Calais, France. The Commonwealth War Graves Commission holds casualty details for Private William Griffin, and he is listed on the Imperial War Museum’s Lives of the First World War website.

Thanks to Maureen and Richard, relatives of William Griffin, for their photo and assistance in compiling this information.