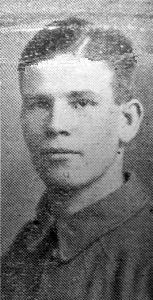 The family moved several times, as shown by the birthplaces of their children. John James, Charles Harold, Sydney Mervin Reginald and Edward Ira were all born in the Madras Presidency, India; followed by Martha Matilda and William Ernest, who were born in the Bombay Presidency, India; Ethel Violet was born in Chester, and Doris and Gladys Winifred were both born in Macclesfield. When Doris was baptised at St Michael’s Church in Macclesfield in January 1909, the family address was 27 Brunswick Terrace and John was described as “Colour Sergeant Instructor, 7th Cheshires”.  The family were at the “7th Battalion Cheshire Drill Hall”, Albert Street, Congleton, on the night of the 1911 census.

The family later lived at 49 Lowerhouse, West Bollington, near Macclesfield.

Charles was already serving with the Grenadier Guards when the war began, and was drafted to France on 14 August 1914.

The death of Lance-Corporal Charles Green was reported in the Macclesfield Times on 29 September 1916:

The list of Bollington men who have given their lives in fighting for the cause of freedom and justice increases as the deadly struggle goes on, and this week two more names have to be added to the roll of honoured dead.

News has been received that Lance-Corporal Charlie Green, of the Grenadier Guards, son of Sergt.-Major and Mrs Green, 49 Lower House, Bollington, has been killed in action in France… the following letter [was] written by Corporal Clarke, a comrade of Private Green… “During the early hours of the morning of the 14th September, while attacking a wood, Charlie was shot through the head by a bullet which caused his instant death…. he was one of the nicest fellows it has been my pleasure to meet…”

Lance-Corporal Green was only 20 years of age, and was of fine physique, standing six feet four inches in height. He came from a military family. His father, Sergt.-Major John Green, went through the Chinese war and served 21 years in India. Sergt-Major Green was formerly caretaker at the Conservative Club, and is now on the staff corps, Alexandra Palace. The deceased, who was born abroad, came over to England when he was about ten years of age, and attended the Christ Church Day School. For a time he lived in Congleton and was a patrol leader in the Congleton Boy Scouts. His parents came to reside in Bollington about eighteen months ago. The deceased enlisted prior to the war, and on several occasions had been included in the guard of honour to royalty. This is the second bereavement Sergt-Major and Mrs Green have suffered during the war. Another son, Private Sydney, 33, was killed in France about fifteen months ago. A third son is serving with the RFA and was wounded in the thigh some time back. He stands six feet two inches…