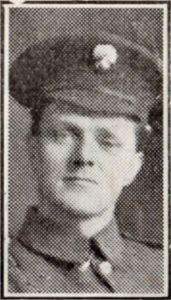 Harold Gardiner was born on 7 October 1887, the son of Agnes and Joseph Gardiner, a farmer of Wildboarclough, near Macclesfield, Cheshire. In 1891, three-year-old Harold was living at High Ash, Wildboarclough, with his parents and siblings Annie (7), Mary Ethel (6), Fred (5) and Maggie (1). Harold was educated at Macclesfield Forest Church of England School from 1892 until 1900.

By 1901 Joseph had died, and Agnes, who had another son, Sydney, was a farmer at a property named Cumberland, situated in the Wildboardclough area .

The family later moved to Macclesfield, and in 1911 Agnes was a boarding house keeper at Memorial House, Buxton Road, Macclesfield, living there with Harold, an estate manager, and  daughter Maggie, a school teacher. Also at the property in 1911 was boarder Charles Towell Gilchrist, who married Maggie in 1914, died of influenza in 1919 and is buried at St Paul's Church, Macclesfield.

Harold enlisted with the Grenadier Guards in August 1914 and was drafted to France on 23 February 1915. He was wounded twice and spent some time recuperating before returning to the front line for a third time in May 1916.

Private Gardiner was killed in action on 10 September 1916, and his death was reported in the Macclesfield Times on 29 September 1916.

Official intimation has reached Mrs Gardiner, Buxton Rd, Macclesfield, of the death in action, on the 10th inst, of her son, Private Harold Gardiner, Grenadier Guards. The deceased, who was 23 years of age, was the second son of the late Mr Joseph Gardiner, who was formerly the tenant of High Ash Farm, Wildboarclough. His maternal grandfather, Mr James Stewart, was for some time the agent of Lord Derby’s Crag estate.

Private Gardiner was educated at the Macclesfield Forest School, and before enlisting in August 1914 had charge of an estate at Handforth. He went out to France in January 1915, and during the battle of Neuve Chapelle was shot in the head. Later he was wounded a second time, and after a period of service on the headquarters staff he rejoined his battalion last May. He was killed in the fighting in the Somme district. His younger brother, Corporal Sydney Gardiner, is serving with the Canadians, and a brother-in-law is with the Royal Engineers.