Mr. and Mrs. John Foster, 73, Wistaston Road, Willaston, have been officially informed that their son, Lance Corporal Allan Foster of the South Wales Borderers has died of wounds (gas poisoning) Lance Corporal Foster, who was only 18 years of age joined the South Lancashire Regiment twelve months ago, and was afterwards transferred to the South Wales Borderers. He was in the employ of Mr. Hatton coal merchant, Willaston. He went to the front six weeks ago and was wounded on June 6th. He was an old boy of Willaston Council School and a member of the Wistaston Parish Church Bible Class. His father, Mr. John Foster is the well-known amateur gardener. An elder brother John Foster, is serving with the R.A.M.C at Malta. 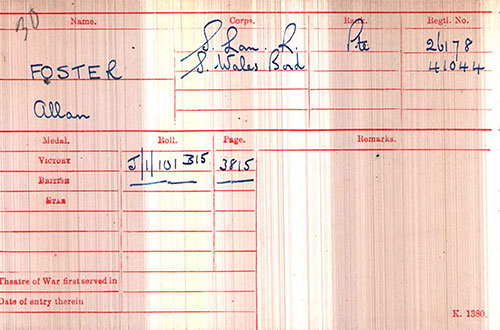