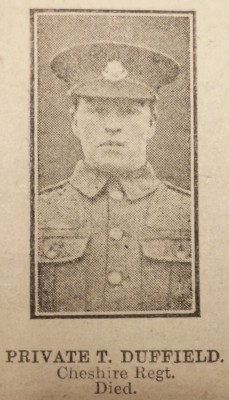 Thomas Duffield was born in Bollington in 1891, the son of Elizabeth (née Press) and Joseph Duffield, a bleach works labourer. In 1901, nine-year-old Tom was living in Foundry Street, Bollington with his parents and siblings George (7), Polly (5) and Janet (2). By 1911 the family was at 9 Foundry Street, Bollington and also included Rachael (21), Gladys (4) and Edwin (1); Thomas had left school and was working as a waggoner for a brickworks, probably Hammond’s brickworks, Pott Shrigley where he was employed when he enlisted.

Thomas Duffield enlisted in Macclesfield and after training was drafted out to Salonika in June 1915. He was killed in action on 18 January 1917 and his death was reported in the Macclesfield Times on 2 February 1917:

Mr and Mrs Joseph Duffield, 8 Waters Green, Macclesfield, have received an official intimation notifying them of the death of their son, Private Thomas Duffield, of the Cheshire Regt, at a place not stated, on January 18th. The late Private Duffield was born at Bollington and was 25 years of age. He received his education at the Water Street Day School and attended the Bollington Primitive Methodist Chapel. His parents came to reside in Macclesfield seven years ago, and at the time of enlisting, on the outbreak of war, the deceased soldier was employed at Hammond’s brickworks, Pott Shrigley. He was a member of the St Peter’s Working Men’s Institute. After a course of training, Private Duffield was drafted out to Salonika nearly two years ago. He was wounded in the arm, and underwent treatment at the Alma Barracks, Ranikhet, India. On his recovery he was drafted to the Indian Expeditionary force, and at the time of his death was supposed to be serving in India. This is the second bereavement Mr and Mrs Duffield have suffered during the present war; their other son, Private George Duffield, of the Cheshires, recently fell in action while fighting in France. Mrs Duffield has three brothers who have responded to the call of King and Country, namely, Private J Press, of Water St, Bollington (who was killed at Hill 60); Private J C Press; and Private Ben (who is serving in Mesopotamia with the Cheshires). Two sons-in-law have also done their duty and several cousins are serving with the colours.

Private Thomas Duffield has no known grave and is commemorated on Panel 14 and 62 of the Basra Memorial in Iraq. The Commonwealth War Graves Commission holds casualty details for Thomas Duffield.

The floral tributes laid when the Macclesfield Park Green War Memorial was unveiled on 21st September 1921 included one with the words “In loving memory from mother and sister, Tom Duffield.”

The brother of George Duffield, who died in Ypres in November 1916.